Spoiler Alert!  In my 'Exposed' series of articles I reveal some of the secrets behind how I created my images.  If you don't want to know how I made 'Blinded by the Light' stop reading now! 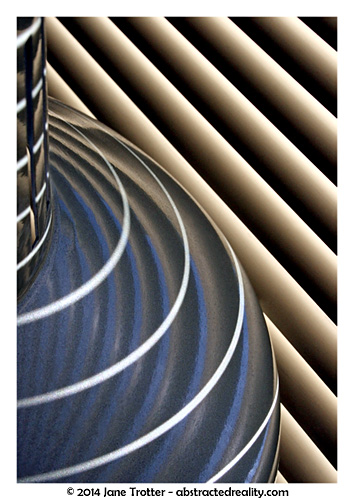 ‘Blinded by the Light’

I love the moment when something unexpected and special catches your eye and you feel compelled to grab the camera. That’s how it was for ‘Blinded by the Light’.

Particularly during the winter, when the sun gets lower in the sky, it shines through the blinds in my office at just the right angle to cast some very interesting shadows on my office furniture. 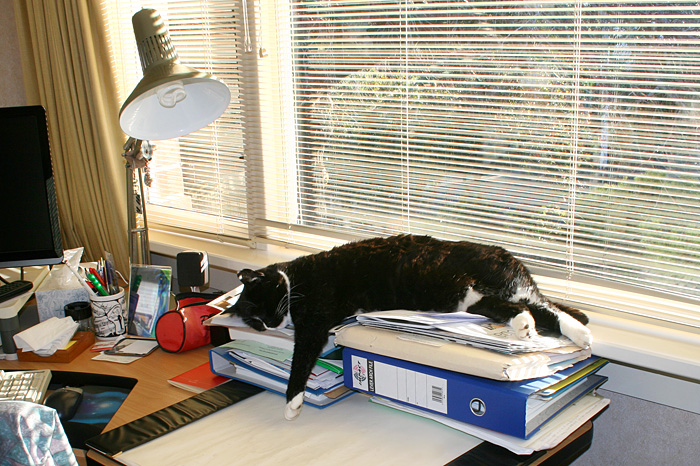 Maxi the cat in my office

As you can see, the smallest feline member of the family regularly takes advantage of the warm spot, notwithstanding the slightly less than comfortable surfaces. You’ll also notice my tall desk lamp has striped shadows appearing on the side. After giving my cat her requisite amount of TLC (who could resist), my gaze travelled upwards to the lamp and I became very intrigued by these shadows and how they ‘bent’ themselves around the curving metal. Delicately removing a disgruntled and complaining moggy to an alternative resting spot, I leaned over and angled the top of the lamp closer towards the blinds. 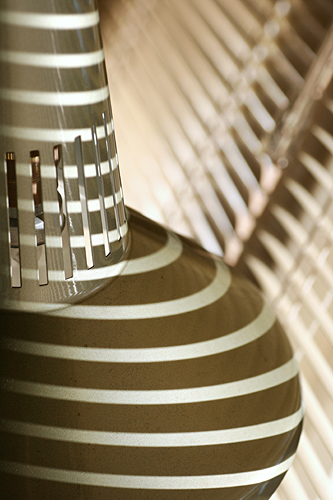 Shadows cast on my desk lamp

Now the ‘shadow play’ worked even better – there was definitely something here which I could explore. So, starting to experiment with different angles and points of view, my photo shoot began to take shape. 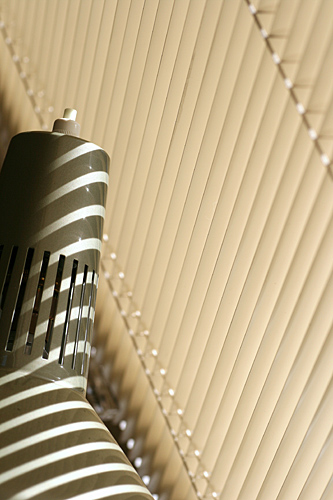 This is one of the earlier shots I came up with but I wasn’t pleased with it. There’s a lot of the blinds and not much of the contrasting curves on the lamp to act as a counterbalance.

Unfortunately, by this stage Dunedin’s winter started to re-assert itself and the sun began to disappear behind grey clouds. Alas, my photo shoot had to be put on hold. 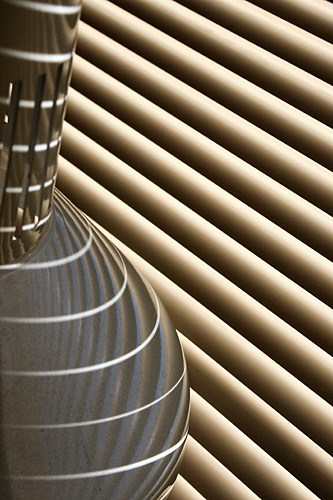 Not to be deterred, I tried again on another day when sunny skies returned. This time I twigged to a new and exciting development – I could dip the blinds!! Whee – what a difference. Now I was getting fantastic shadow effects on the lamp with the horizontal white lines and even stranger vertical grey ridges adding an unusual textural effect to the metal surface.

I was very excited by what I was seeing and the shoot soon became an exercise in learning how to manage and balance the varied core components comprising the shot:
1.    The straight lines of the blinds
2.    The rounded, curved lines appearing on the lamp
3.    The overall shape and contour of the lamp itself

Finding just the right angle of view with all the elements working harmoniously together was proving to be more challenging than I had initially thought. 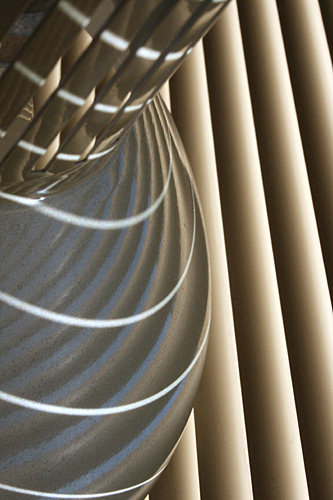 Not quite what I was after

This attempt didn’t work at all! Although the straight lines of the blinds contrast well with the curves, the balance is wrong and the angle of the blinds leads you straight down out of the shot.

Annoyingly, this second photo shoot also had to be curtailed early when the heavens opened up with a sizable downpour!

But perseverance is the key, and I returned a few days later for a third attempt. Things must have been percolating in my mind as this time all of the elements were starting to gel. 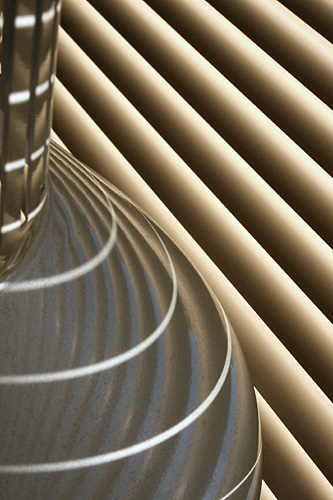 I felt this shot was better, with more of a diagonal effect in the blinds and the weighting of elements was more satisfactory. I almost had it, but there was just something not quite settled – the image didn’t have the stability and composure I wanted. 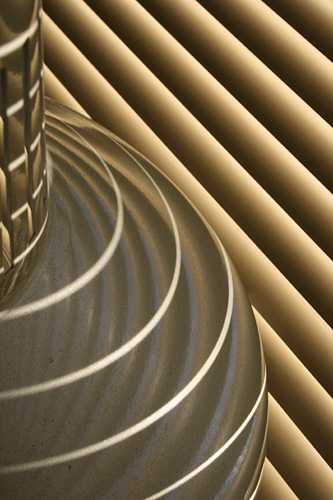 The ‘in camera’ image for ‘Blinded by the Light’

Happiness at last! This is the ‘in camera’ shot for ‘Blinded by the Light’. The lamp is now tilted more upright in the frame and the weighting of elements has more equilibrium – the diagonal blind lines lead you downwards while the curling lighter lines return you to a happy meeting place in the middle. 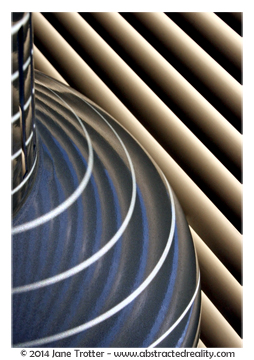 ‘Blinded by the Light’ became an exploration into how to control the interplay of lines and curves, not to mention an exercise in patience with Dunedin’s changeable weather!

However, I thoroughly enjoyed the whole process of making incremental and subtle refinements over several shoots, until I could ‘see’ more clearly how to fit everything together.

No doubt, having read this back story, you’ll have greater insight into why I chose the title too!

Well, it's no surprise what these are! This is probably my most easily discernible image (even … END_OF_DOCUMENT_TOKEN_TO_BE_REPLACED

I must confess, I'm a sucker when it comes to colourful patterns. I think I'm attracted to the … END_OF_DOCUMENT_TOKEN_TO_BE_REPLACED

There are two household chores I really dislike - cleaning the shower and doing the vacuuming. I … END_OF_DOCUMENT_TOKEN_TO_BE_REPLACED

I always like to challenge myself in my photography. Especially with triptychs, it can be extremely … END_OF_DOCUMENT_TOKEN_TO_BE_REPLACED

I always like to keep a selection of the images I take from a photo shoot. Firstly, I’ll choose the … END_OF_DOCUMENT_TOKEN_TO_BE_REPLACED

With today’s abundance of technology and amazing gadgets, it’s easy to forget about the humble piece … END_OF_DOCUMENT_TOKEN_TO_BE_REPLACED

I’m always on the lookout for colourful things which I think might be useful for my photography. But … END_OF_DOCUMENT_TOKEN_TO_BE_REPLACED

I love playing around with images. For me, one of the greatest challenges and pleasures is taking a … END_OF_DOCUMENT_TOKEN_TO_BE_REPLACED

It’s amazing what your subconscious can come up with. A shot can be years in the making if you go … END_OF_DOCUMENT_TOKEN_TO_BE_REPLACED

Sometimes you hold onto an image and you don’t know why. There’s a little voice in the back of your … END_OF_DOCUMENT_TOKEN_TO_BE_REPLACED