Spoiler Alert!  In my 'Exposed' series of articles I reveal some of the secrets behind how I created my images.  If you don't want to know how I made 'Back in the Fold' stop reading now! 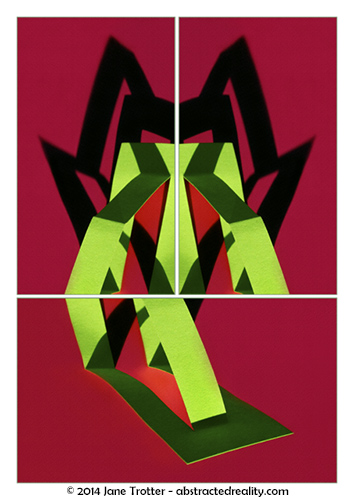 With today’s abundance of technology and amazing gadgets, it’s easy to forget about the humble piece of paper! Despite having a cell phone, I still use a good, old-fashioned diary to write down all of my daily tasks and appointments; I still write little reminder notes to myself and leave them on the kitchen table if there’s a small, miscellaneous thing I need to do. Thank goodness we don’t yet live in a paperless society – if we did, I’d never have had the pleasure of creating ‘Back in the Fold’.

Ever Versatile Card and Paper

Anything and everything are fair game for my photography and pieces of card and paper are no exception. 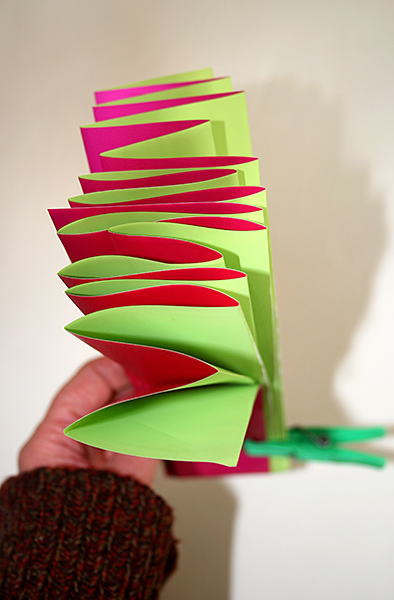 This multi-coloured paper was originally wrapped around some beautiful flowers which my husband bought for me. Once the flowers were spent, I kept the paper, thinking it might come in handy for a photo shoot one day. What attracted me the most was the interplay of green and pink – I liked how the colours complemented each other.

This must have been stewing in my subconscious for a while because after a few weeks I remembered I had some green card which was the same colour as the green side of the paper. I grabbed it and decided I would combine this with the paper’s pink side. Now, having two flat pieces of card and paper is not very exciting. So, I got creative, cutting and folding sections of the card to make it more three-dimensional. 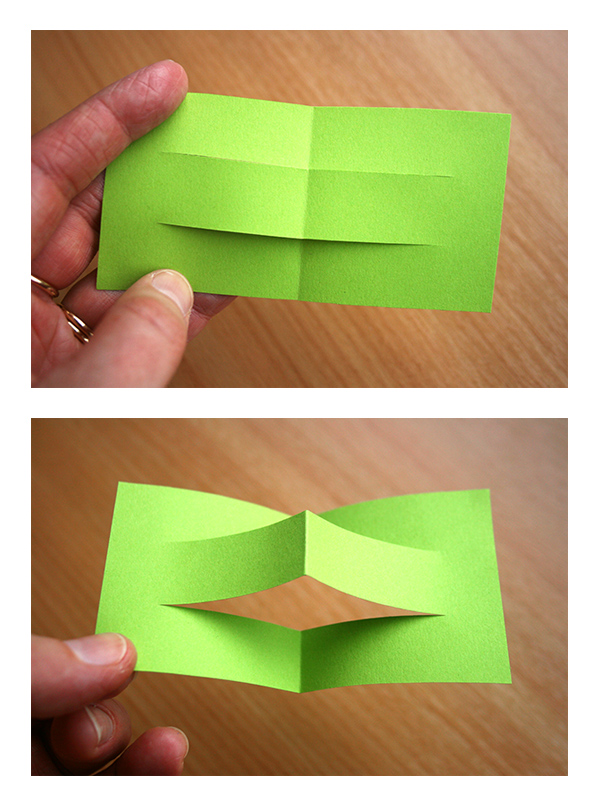 So far so good. Taking advantage of a beautiful sunny and windless day, I ventured outside and placed my props on top of our picnic table. Of course, shadows now came into play with the bright sunlight. That was perfect. I had great fun experimenting by placing the card on subtly different angles to see what effect that would have with the shadow lines. 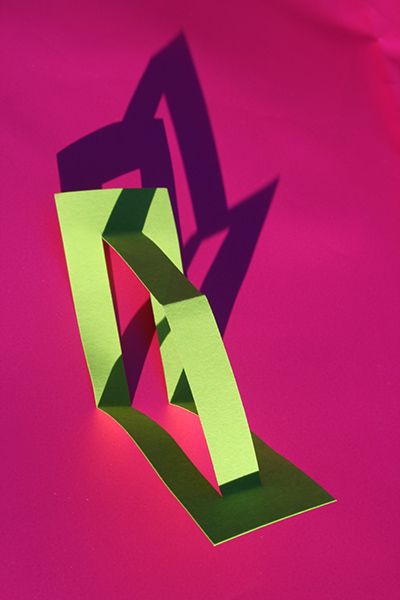 After reviewing my images from the shoot, I finally selected this one. With a few tweaks to improve the colours and contrast, the final version became ‘Runaway Construction’. 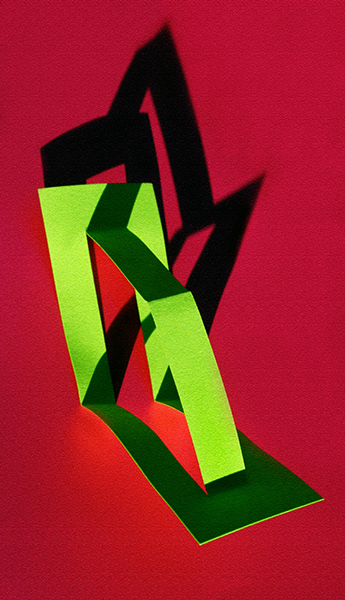 For a few years, that’s how the image remained. But I can’t resist keeping my triptych fingers off my images for long. With its strong geometric shapes and interplay of lines, ‘Runaway Construction’ fitted the bill perfectly for some additional triptych tinkering.

The first crop was pretty straightforward. I’d need something solid for the bottom panel. 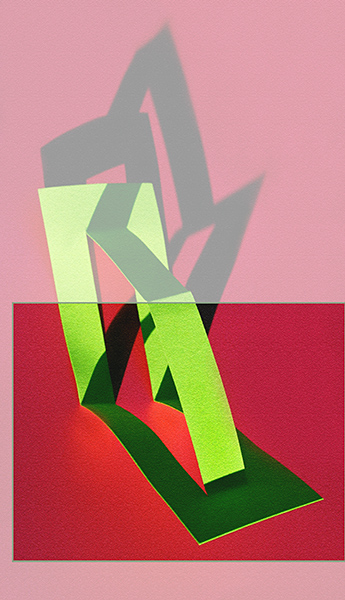 For the top panel I wanted to include as much of the intricate shadow effects as possible.

As it turned out, there was a degree of overlap within the panels. I’m definitely not averse to doing this if it’s employed for sound compositional reasons. 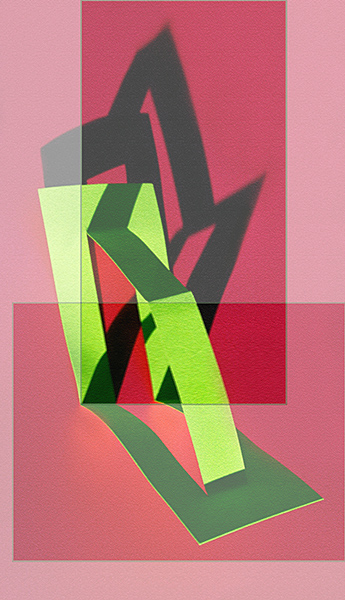 However, two panels do not a triptych make! There was really only one viable choice – to create a mirror image of the top section using a ‘T cut’ construction. 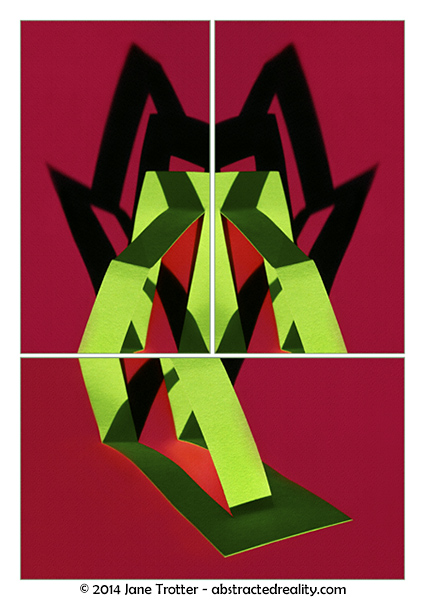 I must confess, I was a little dubious as to whether this would work as there was the potential for the triptych to be unbalanced. There’d be nothing supporting the bottom of the top right panel. However, when I saw the final result, I was thrilled. With daredevil, gravity-defying poise and balance, the whole image seems to remain ‘standing’. To this day, I haven’t been able to work out why! But sometimes, a little mystery in life’s a good thing…

‘Back in the Fold’ is not my only triptych using paper as the source material. If you’d like to see another example, please visit ‘Exposed #8’ on ‘Astral Plane and ‘Mystique’.

Well, it's no surprise what these are! This is probably my most easily discernible image (even … END_OF_DOCUMENT_TOKEN_TO_BE_REPLACED

I must confess, I'm a sucker when it comes to colourful patterns. I think I'm attracted to the … END_OF_DOCUMENT_TOKEN_TO_BE_REPLACED

There are two household chores I really dislike - cleaning the shower and doing the vacuuming. I … END_OF_DOCUMENT_TOKEN_TO_BE_REPLACED

I always like to challenge myself in my photography. Especially with triptychs, it can be extremely … END_OF_DOCUMENT_TOKEN_TO_BE_REPLACED

I always like to keep a selection of the images I take from a photo shoot. Firstly, I’ll choose the … END_OF_DOCUMENT_TOKEN_TO_BE_REPLACED

With today’s abundance of technology and amazing gadgets, it’s easy to forget about the humble piece … END_OF_DOCUMENT_TOKEN_TO_BE_REPLACED

I’m always on the lookout for colourful things which I think might be useful for my photography. But … END_OF_DOCUMENT_TOKEN_TO_BE_REPLACED

I love playing around with images. For me, one of the greatest challenges and pleasures is taking a … END_OF_DOCUMENT_TOKEN_TO_BE_REPLACED

It’s amazing what your subconscious can come up with. A shot can be years in the making if you go … END_OF_DOCUMENT_TOKEN_TO_BE_REPLACED

Sometimes you hold onto an image and you don’t know why. There’s a little voice in the back of your … END_OF_DOCUMENT_TOKEN_TO_BE_REPLACED