Spoiler Alert!  In my 'Exposed' series of articles I reveal some of the secrets behind how I created my images.  If you don't want to know how I made 'Solar Flare' stop reading now! 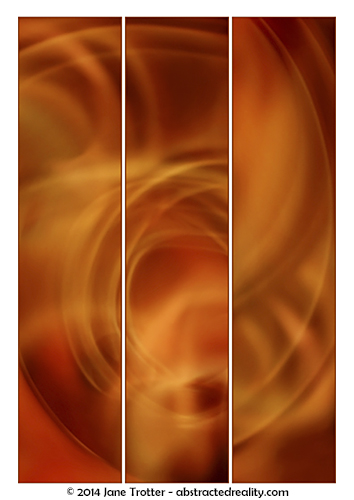 I always like to keep a selection of the images I take from a photo shoot. Firstly, I’ll choose the ‘best one’ which I’ll ultimately spend time on crafting and finessing into the final abstract or triptych.

Secondly, I’ll keep a set of images which are similar to the one I chose, just to give me more scope and flexibility if I want to explore making a triptych from multiple sources.

Finally, I’ll keep some totally ‘miscellaneous’ shots – ones which bear no resemblance to what I’ve actually chosen to work on, but which I think may have some potential down the line, even if I can’t envisage an immediate future for them.

‘Solar Flare’ originates from one of these random, miscellaneous images. 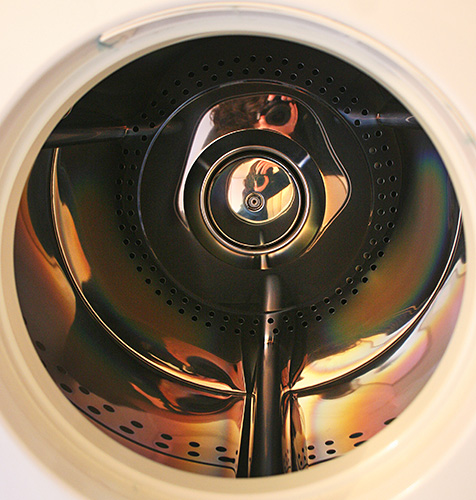 Maybe I’m a bit like a bird which is attracted to shiny objects! I do tend to go searching for things and places which have interesting and eye-catching reflective surfaces.

The inside of my clothes dryer is one such location.

On this particular photo shoot, I was mostly concentrating on capturing the peculiar patterns and fantastical reflections in the curving stainless steel. Almost all of the shots were static, like the one below. 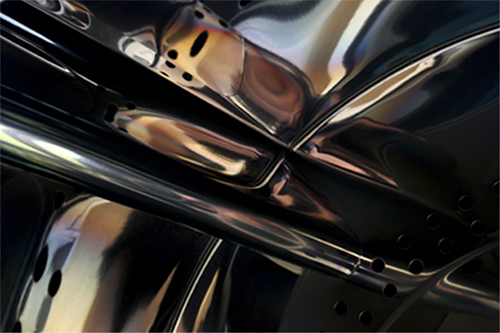 In fact, this image became the source image for the triptych ‘Deus Ex Machina’. Nearing the end of the shoot I figured I probably had enough of these static images to play with, so decided to finish off with a few flourishes. I set a slightly slower shutter speed and began moving the camera in large circular gestures, just to see what would happen and to satisfy my curiosity.

Upon reviewing the images, most of my “let’s see what happens when I go rogue in a clothes dryer” shots were pretty dire! However, one stood out and I decided to keep it for a rainy day. 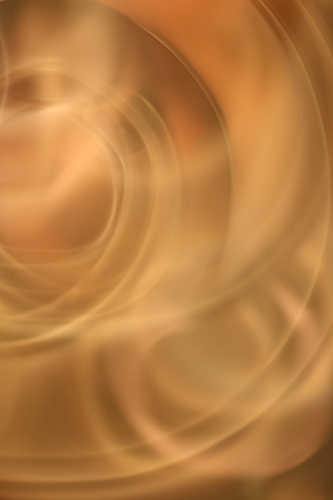 Several months went by before I took another look and really began to think about what I could do with this shot. I really enjoyed the sense of motion and turbulence, and I imagined an inherent radiance and glow.

Wanting to intensify this feeling, I decided to warm up the colours even more. 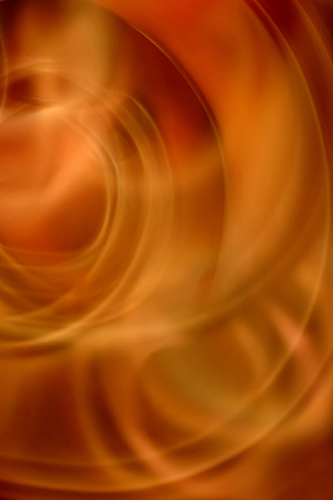 Now I was visualising a massive sun with its huge molten tendrils outstretched into the vastness of space.

Experimenting with orientation, I rotated the image 180 degrees to see if I could mimic the sun even more. 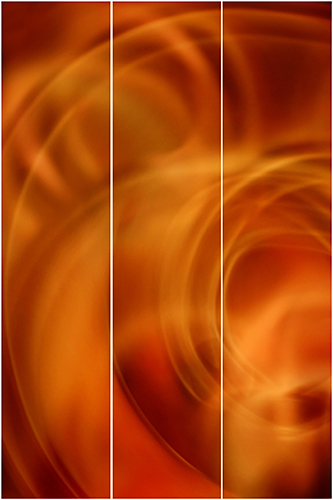 While I preferred this orientation, I still felt I could do more, so decided to make the vertical triptych cuts. As they stood, the triptych format wasn’t adding anything to the image. Further tweaking was required…

After much playing and careful evaluation, this is the final arrangement I decided upon. All of the panels have been moved and/or rotated to provide an even greater sense of giant flares being hurled out into space. The central core of the sun is also now situated more in the middle of the triptych to establish balance.

I’m very thankful I kept this shot. It wasn’t one in the original photo shoot which I was particularly ‘serious’ about, but rather, on a whim I tossed it in at the end of a more systematic process and application. It’s shown me the value of keeping an open mind for all of my images and not to discount anything because it wasn’t part of a particular, planned approach.

Well, it's no surprise what these are! This is probably my most easily discernible image (even … END_OF_DOCUMENT_TOKEN_TO_BE_REPLACED

I must confess, I'm a sucker when it comes to colourful patterns. I think I'm attracted to the … END_OF_DOCUMENT_TOKEN_TO_BE_REPLACED

There are two household chores I really dislike - cleaning the shower and doing the vacuuming. I … END_OF_DOCUMENT_TOKEN_TO_BE_REPLACED

I always like to challenge myself in my photography. Especially with triptychs, it can be extremely … END_OF_DOCUMENT_TOKEN_TO_BE_REPLACED

I always like to keep a selection of the images I take from a photo shoot. Firstly, I’ll choose the … END_OF_DOCUMENT_TOKEN_TO_BE_REPLACED

With today’s abundance of technology and amazing gadgets, it’s easy to forget about the humble piece … END_OF_DOCUMENT_TOKEN_TO_BE_REPLACED

I’m always on the lookout for colourful things which I think might be useful for my photography. But … END_OF_DOCUMENT_TOKEN_TO_BE_REPLACED

I love playing around with images. For me, one of the greatest challenges and pleasures is taking a … END_OF_DOCUMENT_TOKEN_TO_BE_REPLACED

It’s amazing what your subconscious can come up with. A shot can be years in the making if you go … END_OF_DOCUMENT_TOKEN_TO_BE_REPLACED

Sometimes you hold onto an image and you don’t know why. There’s a little voice in the back of your … END_OF_DOCUMENT_TOKEN_TO_BE_REPLACED