Spoiler Alert!  In my 'Exposed' series of articles I reveal some of the secrets behind how I created my images.  If you don't want to know how I made 'Ghost in the Machine' stop reading now! 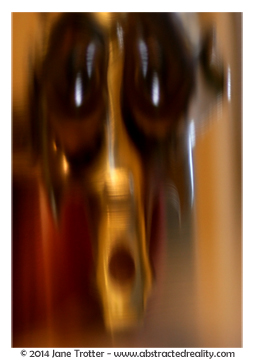 Ghost in the Machine

We can all spend a great deal of time in the kitchen. If you’re anything like me, more often than not you’re in a rush to get the evening meal underway after a long days work, you’re washing dishes, or tidying up benches, hastily putting away the ingredients after baking a delicious chocolate apple cake – my speciality!

While the kitchen is undoubtedly a culinary creative hub, the results of which are praised and enthusiastically devoured by family and friends, it can also be a source of inspiration for many photographic adventures!

One day, when I hadn’t managed to tidy things away quite as promptly as I usually do, I noticed the can opener lying next to the cheese grater. What caught my attention was the oddly shaped and somewhat distorted reflection of the can opener in the curved metal surface. 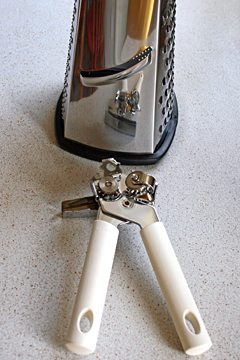 Always on the lookout for potential abstracts, I couldn’t let this one pass me by. In the hope of garnering some additional reflective possibilities, I moved my grater and can opener over to the stainless steel section of the bench and then began to play.

There’s always a ‘settling in’ period when I first begin a photo shoot – when I’m getting a feel for my subject matter and what can be revealed. Manoeuvring the can opener around in one hand while photographing with the other, I began to explore the different shapes and patterns I could create in the reflection.

It wasn’t long before I was beginning to see a face in my images. A strange, angular and disturbing character began to manifest itself – my ‘Ghost in the Machine’ was trying to escape! I loved the material I was getting and followed this direction, gathering multiple images of my sorrowful looking phantom. 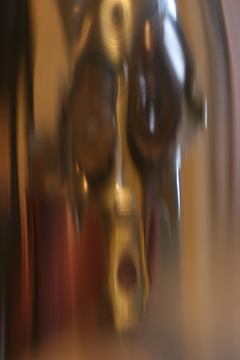 To the left is the original, ‘in camera’ shot and the one I thought best captured the expression of this tortured soul.

My decision to do the photo shoot over the stainless steel section of my bench top paid off. The extra light from this surface helped to highlight the red sleeve of the jersey I was wearing. Reflected in the grater, this gives the ghost a strange, serpentine ‘neck’.

To present the final image, I’ve worked on enhancing the colours, particularly the golden tones, and cropped in tightly around the ‘face’.

Finally, I must confess to indulging in a little creative licence. In the final presentation, the eye on the left has been cloned in from the right, partly to provide balance to the image, but mostly – I just drew the line at having a one-eyed ghost!

Well, it's no surprise what these are! This is probably my most easily discernible image (even … END_OF_DOCUMENT_TOKEN_TO_BE_REPLACED

I must confess, I'm a sucker when it comes to colourful patterns. I think I'm attracted to the … END_OF_DOCUMENT_TOKEN_TO_BE_REPLACED

There are two household chores I really dislike - cleaning the shower and doing the vacuuming. I … END_OF_DOCUMENT_TOKEN_TO_BE_REPLACED

I always like to challenge myself in my photography. Especially with triptychs, it can be extremely … END_OF_DOCUMENT_TOKEN_TO_BE_REPLACED

I always like to keep a selection of the images I take from a photo shoot. Firstly, I’ll choose the … END_OF_DOCUMENT_TOKEN_TO_BE_REPLACED

With today’s abundance of technology and amazing gadgets, it’s easy to forget about the humble piece … END_OF_DOCUMENT_TOKEN_TO_BE_REPLACED

I’m always on the lookout for colourful things which I think might be useful for my photography. But … END_OF_DOCUMENT_TOKEN_TO_BE_REPLACED

I love playing around with images. For me, one of the greatest challenges and pleasures is taking a … END_OF_DOCUMENT_TOKEN_TO_BE_REPLACED

It’s amazing what your subconscious can come up with. A shot can be years in the making if you go … END_OF_DOCUMENT_TOKEN_TO_BE_REPLACED

Sometimes you hold onto an image and you don’t know why. There’s a little voice in the back of your … END_OF_DOCUMENT_TOKEN_TO_BE_REPLACED