Spoiler Alert!  In my 'Exposed' series of articles I reveal some of the secrets behind how I created my images.  If you don't want to know how I made 'First Contact' stop reading now! 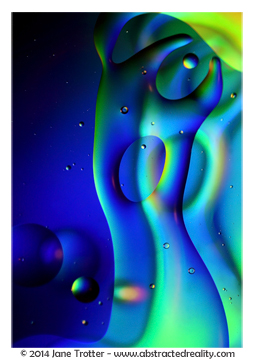 They say oil and water don’t mix. I beg to differ! Throw in something which will provide a colourful, reflective surface and you’ve got the ingredients for hours of fun with the camera, not to mention the potential for making a great abstract photograph.

‘First Contact’ is the result of some of my early attempts playing with oil and water. I hadn’t tried this technique before and I was very keen to see what would eventuate from my experimentation.

What ensued turned out to be a journey of discovery with twists and turns, revelations, total abandonment and a large helping of just good old plain luck. 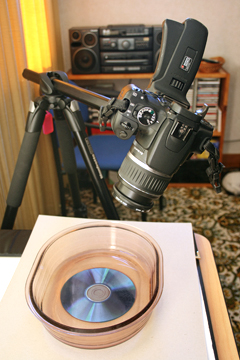 I decided a CD would be the best candidate to provide the necessary reflective surface underneath the oil and water, and I placed this under a small Pyrex dish.

Working close to a window allowed plenty of natural light and I was able to reposition the CD as necessary to find just the right colours and reflections.

I must say my, my Manfrotto tripod came into its own here. The ability to safely and securely align my camera horizontally above the subject matter was a huge help.

The final step was easy – add the liquids. 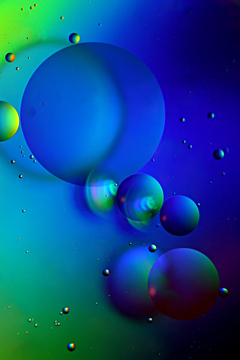 Looking through the camera I was delighted with the beautiful greens and blues reflecting off the CD. I had certainly struck it lucky with the light. Keen to begin, I took a paperclip and carefully and slowly began to ‘nudge’ the oil droplets so they would appear in the frame.

Often I would have to wait until they were in the position I wanted, but even then, that was usually only for a moment, as liquids have a habit of moving. Your nicely framed shot inevitably begins to transform into something completely different and far less pleasing.

I was getting many shots like the one you see to the left, with the oil droplets intact in their natural, circular formations. I found some of these quite attractive, but I was becoming increasingly frustrated at my lack of control over how the shots were going to look. These oil droplets had a mind of their own and never ended up in their intended location! 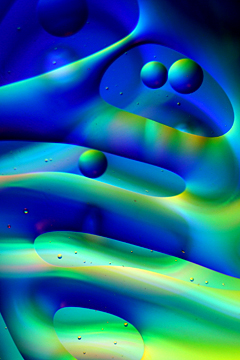 Sometimes you just have to accept that you can’t control the universe! It was time to embrace the chaos. In fact – it was time to create the chaos. I grabbed the paperclip which, previously I had been so cautious with, and started to make vigorous and energetic swirls in the liquids. The oil was completely disrupted and became long and streaky. Unusual curving shapes would appear, disappear and reconstitute themselves in a glorious random dance.

I knew any photo I took from this point on would be totally out of my control – but I’d decided this was going to be my new approach. Literally, I’d be going with the flow.

The resulting images were fantastical, surreal and enormously satisfying. I had a smile on my face for the rest of the entire shoot. Ironically, letting go produced the best results. 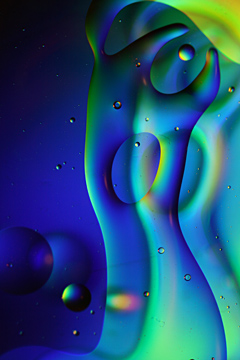 I will be the first to admit, the Gods must have been smiling along with me because serendipity played a big part. There was no way I could anticipate or arrange the oil to look like this. I was extremely lucky to have taken the shot at that precise moment.

I have always felt a strong connection with this image. The shapes suggest a giant cosmic hand reaching out into space. I love the vastness, grandeur and sense of mystery.

In the end, I didn’t have to do very much to the original shot you see here. There was some basic tidying up (cloning out some unsightly dust particles and a stray hair) and I have boosted the saturation to give the colours their maximum impact.

I learnt a lot during this photo shoot, probably more about myself than photography. Don’t be afraid to ‘mix it up’ and take a different path than you first intended. You might just find your new journey opens up many pleasant surprises…

I must confess, I'm a sucker when it comes to colourful patterns. I think I'm attracted to the … END_OF_DOCUMENT_TOKEN_TO_BE_REPLACED

There are two household chores I really dislike - cleaning the shower and doing the vacuuming. I … END_OF_DOCUMENT_TOKEN_TO_BE_REPLACED

I always like to challenge myself in my photography. Especially with triptychs, it can be extremely … END_OF_DOCUMENT_TOKEN_TO_BE_REPLACED

I always like to keep a selection of the images I take from a photo shoot. Firstly, I’ll choose the … END_OF_DOCUMENT_TOKEN_TO_BE_REPLACED

With today’s abundance of technology and amazing gadgets, it’s easy to forget about the humble piece … END_OF_DOCUMENT_TOKEN_TO_BE_REPLACED

I’m always on the lookout for colourful things which I think might be useful for my photography. But … END_OF_DOCUMENT_TOKEN_TO_BE_REPLACED

I love playing around with images. For me, one of the greatest challenges and pleasures is taking a … END_OF_DOCUMENT_TOKEN_TO_BE_REPLACED

It’s amazing what your subconscious can come up with. A shot can be years in the making if you go … END_OF_DOCUMENT_TOKEN_TO_BE_REPLACED

Sometimes you hold onto an image and you don’t know why. There’s a little voice in the back of your … END_OF_DOCUMENT_TOKEN_TO_BE_REPLACED

Often we take everyday scenes for granted and don’t give much thought to what secret, artistic … END_OF_DOCUMENT_TOKEN_TO_BE_REPLACED