Spoiler Alert!  In my 'Exposed' series of articles I reveal some of the secrets behind how I created my images.  If you don't want to know how I made 'Deus Ex Machina' stop reading now! 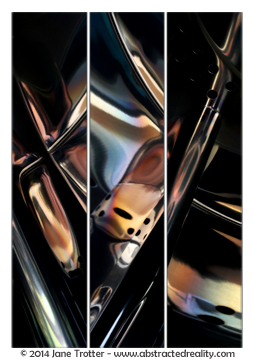 OK – so the laundry isn’t exactly the most exciting, sophisticated or glamorous location for a photo shoot!

No breath-taking sunsets, no standing atop a tall skyscraper looking over a vast metropolis, no riding in a helicopter over snow-capped mountain ranges or paddling down a vast, serpentine river far from civilisation.

While the laundry may seem the most unlikely of places, you can still go on your very own photographic adventure, discover hidden treasures, challenge your creativity and have fun.

All it takes is a little imagination!

Curiosity and a clothes dryer 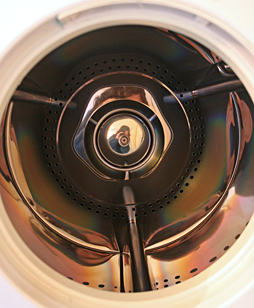 Have you ever looked inside your clothes dryer? I mean really looked. It’s fascinating. A series of small holes dot part of the interior and the curved metallic surfaces produce wonderfully distorted reflections of shape and colour. Strange patterns merge and dissipate when you shift your position or rotate the drum. It’s cavernous, mysterious with darker, muted colours and all together, has a slightly surreal feel.

Completely captivated by the possibilities and potential for a really unusual shot, I spent a good couple of hours experimenting to see what peculiar reflections I could concoct by spinning the drum and manoeuvring myself to find a different angle of view.

This is the original ‘in camera’ image for ‘Deus Ex Machina’. I was pleased to have captured not only the holes at the rear of the drum, but also their reflections in a number of locations in the image.

The colours were varied, with the appealing rusty browns offset nicely against the lighter areas, and there was just the right mix of ‘solid’ surface features to counterbalance the reflected patterns.

I worked on the image, mainly improving colour and contrast, but there was always something in the back of my mind saying “there’s more you can do with this!” I decided to rotate the image 90 degrees to the left. Then it hit me. This is what was stewing in my subconscious. Faces.

The three surreal and unusual ‘faces’ of ‘Deus Ex Machina’

I must have only half recognised them in the horizontal orientation, but now viewed vertically, they became very apparent. I found the face on the left very striking, if not a little disturbing.

Time to cast a triptych eye

Several months passed before I revisited this image. I was now exploring the triptych format and was in the process of re-evaluating some of my old images to see if they would make suitable triptych candidates. 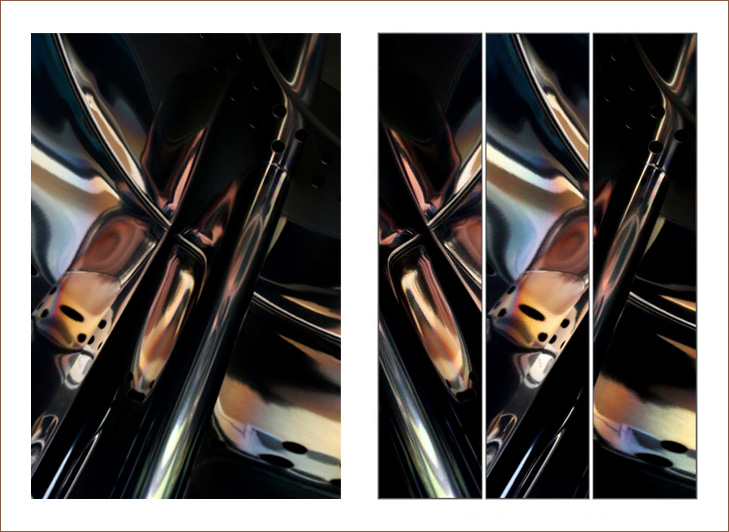 ‘Deus Ex Machina’ in the Triptych format – before and after

New ideas immediately sprang to mind. Long vertical cuts would allow each ‘face’ to have its own panel – its own individual identity. The strongest and most ‘recognisable’ of the three faces would now appear prominently in the middle of the triptych, bestowing significantly more gravitas.

Fortunately, the lines, patterns and reflections surrounding the faces interconnected well across the three panels, helping to give a more dynamic feel.

The most unlikely of places

I was extremely pleased with the new triptych version, even though there was a fairly long gestation period between the initial shot and its final presentation. My expedition to the laundry had proved to be fruitful, and goes to show the most unlikely of places can be a fertile ground for your photographic imagination.

Well, it's no surprise what these are! This is probably my most easily discernible image (even … END_OF_DOCUMENT_TOKEN_TO_BE_REPLACED

I must confess, I'm a sucker when it comes to colourful patterns. I think I'm attracted to the … END_OF_DOCUMENT_TOKEN_TO_BE_REPLACED

There are two household chores I really dislike - cleaning the shower and doing the vacuuming. I … END_OF_DOCUMENT_TOKEN_TO_BE_REPLACED

I always like to challenge myself in my photography. Especially with triptychs, it can be extremely … END_OF_DOCUMENT_TOKEN_TO_BE_REPLACED

I always like to keep a selection of the images I take from a photo shoot. Firstly, I’ll choose the … END_OF_DOCUMENT_TOKEN_TO_BE_REPLACED

With today’s abundance of technology and amazing gadgets, it’s easy to forget about the humble piece … END_OF_DOCUMENT_TOKEN_TO_BE_REPLACED

I’m always on the lookout for colourful things which I think might be useful for my photography. But … END_OF_DOCUMENT_TOKEN_TO_BE_REPLACED

I love playing around with images. For me, one of the greatest challenges and pleasures is taking a … END_OF_DOCUMENT_TOKEN_TO_BE_REPLACED

It’s amazing what your subconscious can come up with. A shot can be years in the making if you go … END_OF_DOCUMENT_TOKEN_TO_BE_REPLACED

Sometimes you hold onto an image and you don’t know why. There’s a little voice in the back of your … END_OF_DOCUMENT_TOKEN_TO_BE_REPLACED