Spoiler Alert!  In my 'Exposed' series of articles I reveal some of the secrets behind how I created my images.  If you don't want to know how I made 'Mystique’ and ‘Astral Plane' stop reading now! 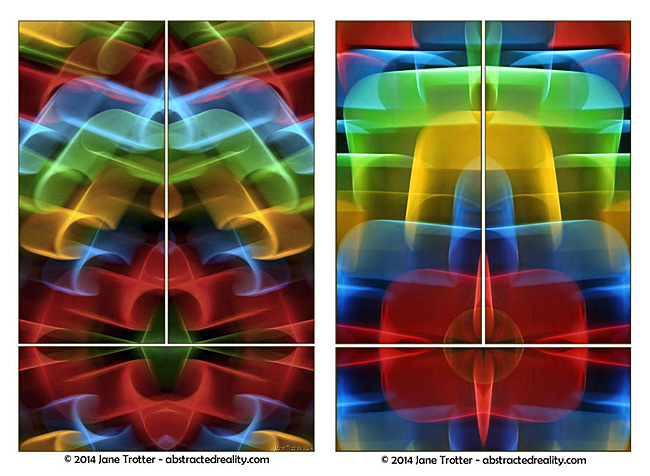 I can’t help myself. When it comes to colourful objects I’m like a moth to a flame! So when I was looking for some coloured pieces of paper for a task completely unrelated to photography it was a herculean effort to keep from picking up my camera. With that incentive, I made short work of the job at hand and spent the rest of the afternoon playing with paper. 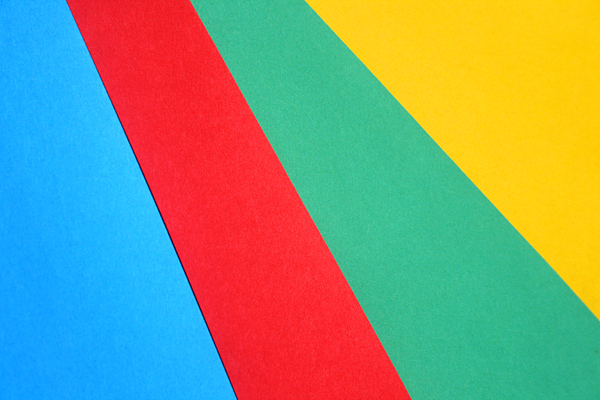 Choosing the most vibrant colours, I began arranging my A4 sheets in different combinations to see how the colours played off against each other. While this was a useful exercise, I soon decided I needed to get a bit more ‘creative’ with the paper – flat sheets were just a little too ‘flat’. 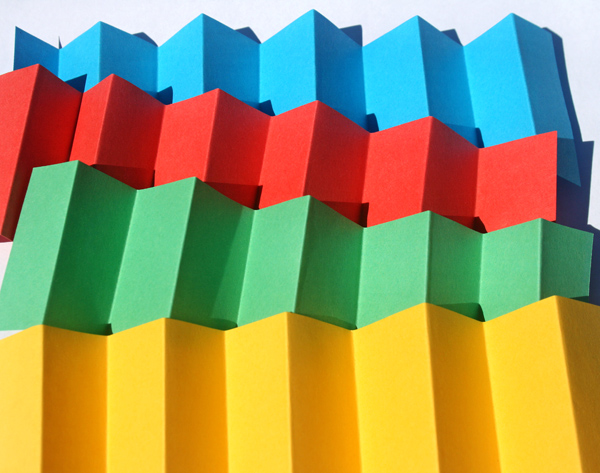 Folding the paper to add depth

So out came the scissors and I started to cut the paper into smaller sections. Wanting to add a little depth into the equation, I also made several small folds. This was starting to look a lot more interesting and gave me more scope. But I was still in a horizontal mindset. 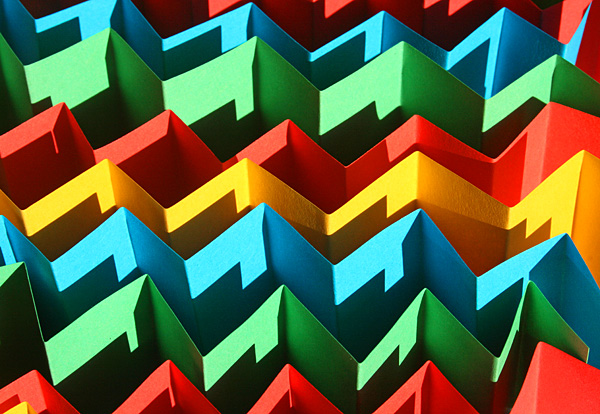 Standing the folded paper up on its side

Then it hit me – why not try a vertical orientation and stand the paper up on its side? This made all the difference. With the sunlight from my window providing strong side lighting, the shadows became an integral part of the set up and added an extra dimension to the geometric patterning. I spent a good deal of time exploring these shapes and shadows.

And in the spirit of exploration and broadening interpretations, I decided to start moving the camera as a fun way to finish off the photo shoot. 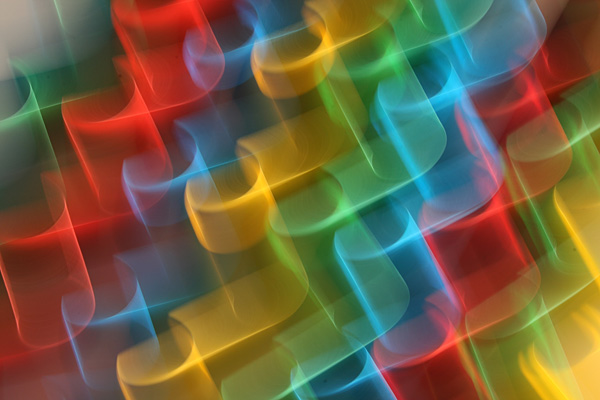 Original ‘in camera’ image for Mystique

This is the original image for ‘Mystique’. With a ¼ second exposure, I used a panning action with a tight, quick, circular motion right at the end. I particularly like the tubular effect this created. 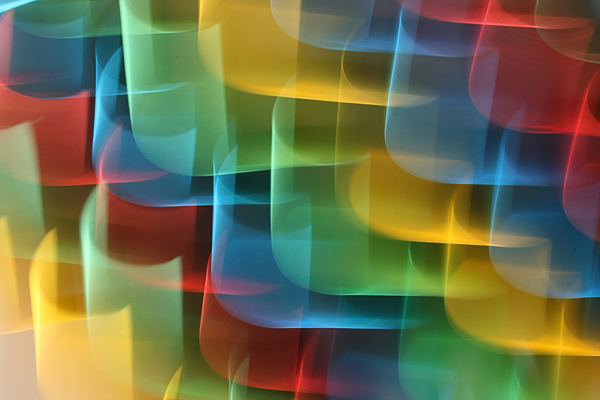 Here’s the original image for ‘Astral Plane’. Also with a ¼ second exposure, I used a similar technique, but this time with a more continuous and flowing action.

One of the big advantages of working with abstracts is that you can play with different orientations far more easily than if you were taking more representative shots. I liked the effects I’d achieved by moving the camera, but in the originals, the orientation wasn’t the best. So I decided to crop a little and rotated both. 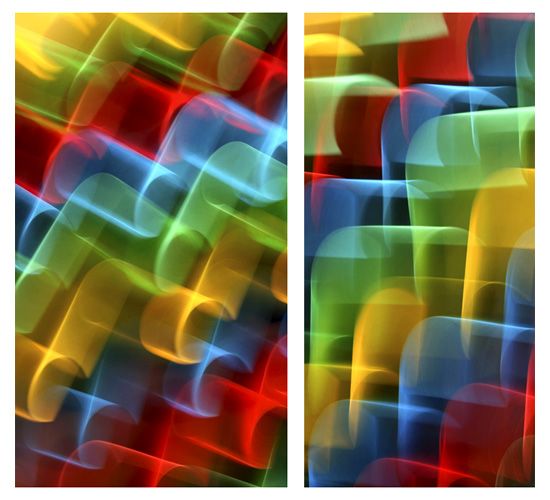 Now I was looking at a much more dynamic pair of images. The original for Mystique felt more active with a strong sense of diagonal movement down across the image, while the original for Astral Plane took on new life, suggesting a waterfall of light and colour.

Continuing on my experimental journey, I decided to see what these images would look like mirrored.

I really enjoyed the symmetry of line, colour and form, and felt I was definitely onto something. But the images still felt incomplete and unbalanced. Everything was very top heavy with nothing to act as a counter balance at the bottom.

Then I began to see the possibility of a second mirroring effect, using what was at the base of the images.

These are the final versions of ‘Mystique’ and ‘Astral Plane’. The horizontal mirroring has now provided much more of a sense of stability and solidity, as well as an identifiable focal point for each image at the ‘T’ intersection of the triptych. I’ve also cropped in even tighter to help isolate the main material.

I’m quite fond of both of these images and really enjoy the synchronicity of colour and form, as well as the sense of layering and depth created in each shot. It was definitely an enjoyable learning curve as these pieces of paper began to take on new dimensions and creative possibilities.

‘Astral Plane’ and ‘Mystique’ are not my only triptychs using paper as their source material. If you’d like to see another example, please visit ‘Exposed #16’ on ‘Back in the Fold’.

Well, it's no surprise what these are! This is probably my most easily discernible image (even … END_OF_DOCUMENT_TOKEN_TO_BE_REPLACED

I must confess, I'm a sucker when it comes to colourful patterns. I think I'm attracted to the … END_OF_DOCUMENT_TOKEN_TO_BE_REPLACED

There are two household chores I really dislike - cleaning the shower and doing the vacuuming. I … END_OF_DOCUMENT_TOKEN_TO_BE_REPLACED

I always like to challenge myself in my photography. Especially with triptychs, it can be extremely … END_OF_DOCUMENT_TOKEN_TO_BE_REPLACED

I always like to keep a selection of the images I take from a photo shoot. Firstly, I’ll choose the … END_OF_DOCUMENT_TOKEN_TO_BE_REPLACED

With today’s abundance of technology and amazing gadgets, it’s easy to forget about the humble piece … END_OF_DOCUMENT_TOKEN_TO_BE_REPLACED

I’m always on the lookout for colourful things which I think might be useful for my photography. But … END_OF_DOCUMENT_TOKEN_TO_BE_REPLACED

I love playing around with images. For me, one of the greatest challenges and pleasures is taking a … END_OF_DOCUMENT_TOKEN_TO_BE_REPLACED

It’s amazing what your subconscious can come up with. A shot can be years in the making if you go … END_OF_DOCUMENT_TOKEN_TO_BE_REPLACED

Sometimes you hold onto an image and you don’t know why. There’s a little voice in the back of your … END_OF_DOCUMENT_TOKEN_TO_BE_REPLACED