Spoiler Alert!  In my 'Exposed' series of articles I reveal some of the secrets behind how I created my images.  If you don't want to know how I made 'Angel Wing' stop reading now! 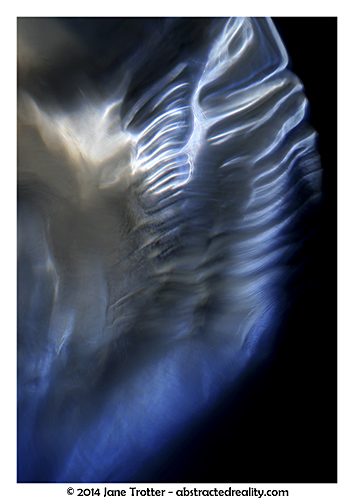 Whether it was by divine intervention or pure serendipity, the image ‘Angel Wing’ was certainly one of a kind. It all began when I was doing the housework. Now I wouldn’t exactly call doing the housework awe inspiring, but it did lead to an unexpected discovery. 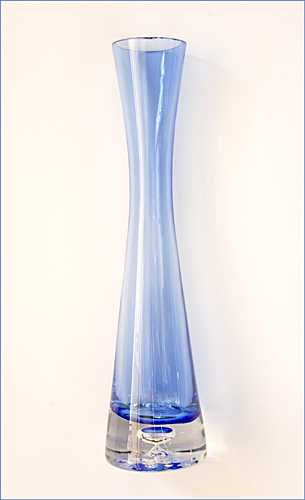 It was time to do some dusting and when I tidied the top of our bookshelf in the lounge, I came across this blue vase. I must have been in a quizzical mood (not my usual mood for dusting!) because I began to turn the vase in my hand and examine it in closer detail. 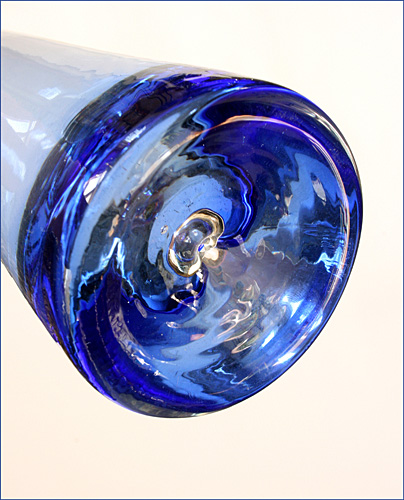 Bottom of the vase

Wanting some better light, I ventured closer to the lounge window and continued my observations. Turning the vase upside down revealed fascinating and compelling swirling patterns and shapes, and beautiful shades of blue. Needing no excuse to completely abandon my housework, I grabbed my camera! 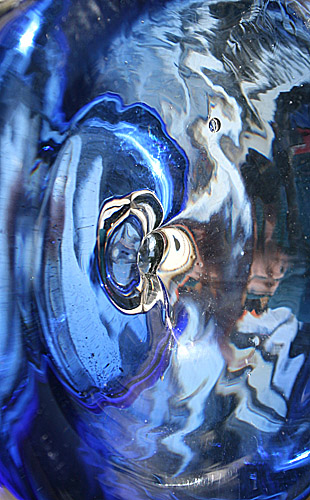 My first attempts looked much like this shot. I enjoyed exploring the ‘liquid’ qualities of the reflections through the bottom of the glass, but wanted to move in even closer. The decision to use my macro lens was a good one as it allowed me a more subtle approach and the resulting shots took on a more ‘impressionistic’ feel. 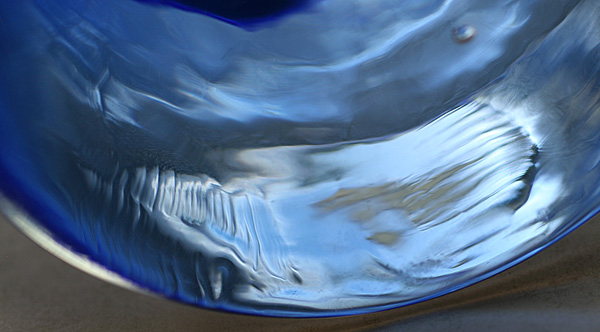 Small defects in the glass

Then purely by accident, I stumbled upon a couple of unusual defects in the glass. Near the rim were two ridged sections which only became fully apparent when viewed through the macro lens. 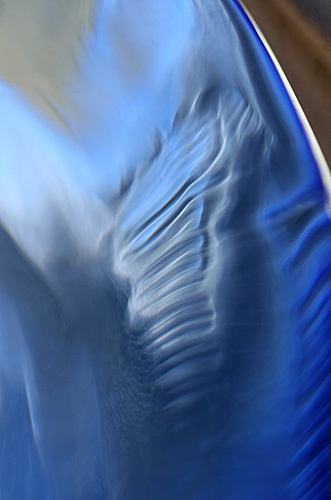 This one in particular caught my eye. Reminding me of some ancient, fossilised formation, these tiny ridges captured my imagination and became the focus of my shoot from then on. Unfortunately, they were rather difficult to photograph and finding the right combination of lighting, angle of view and position in the frame was challenging to say the least!

Sometimes, by good fortune rather than good design, everything just comes together perfectly for one special shot…in a moment it’s there and the next it’s gone, no matter how many times you try to reproduce it. 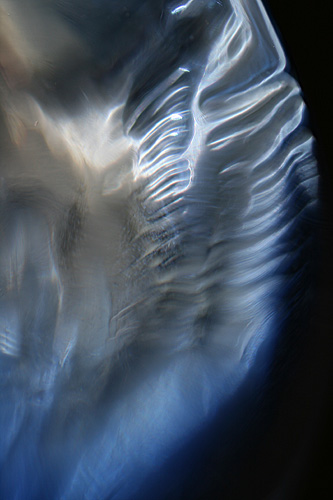 This is how it was for ‘Angel Wing’ – Lady Luck must have been smiling on me in that one instant. I must have serendipitously held the vase at just the right angle so the light shone through, illuminating the ridges and capturing a beautiful, ethereal blue aura.

During the entire photo shoot, this was the only shot that truly caught the mystical qualities and inner magic which I was searching for. I was extremely happy and knew instantly that it was ‘the one’. I had found my ‘Angel Wing’ or perhaps it had found me.

Well, it's no surprise what these are! This is probably my most easily discernible image (even … END_OF_DOCUMENT_TOKEN_TO_BE_REPLACED

I must confess, I'm a sucker when it comes to colourful patterns. I think I'm attracted to the … END_OF_DOCUMENT_TOKEN_TO_BE_REPLACED

There are two household chores I really dislike - cleaning the shower and doing the vacuuming. I … END_OF_DOCUMENT_TOKEN_TO_BE_REPLACED

I always like to challenge myself in my photography. Especially with triptychs, it can be extremely … END_OF_DOCUMENT_TOKEN_TO_BE_REPLACED

I always like to keep a selection of the images I take from a photo shoot. Firstly, I’ll choose the … END_OF_DOCUMENT_TOKEN_TO_BE_REPLACED

With today’s abundance of technology and amazing gadgets, it’s easy to forget about the humble piece … END_OF_DOCUMENT_TOKEN_TO_BE_REPLACED

I’m always on the lookout for colourful things which I think might be useful for my photography. But … END_OF_DOCUMENT_TOKEN_TO_BE_REPLACED

I love playing around with images. For me, one of the greatest challenges and pleasures is taking a … END_OF_DOCUMENT_TOKEN_TO_BE_REPLACED

It’s amazing what your subconscious can come up with. A shot can be years in the making if you go … END_OF_DOCUMENT_TOKEN_TO_BE_REPLACED

Sometimes you hold onto an image and you don’t know why. There’s a little voice in the back of your … END_OF_DOCUMENT_TOKEN_TO_BE_REPLACED