Spoiler Alert!  In my 'Exposed' series of articles I reveal some of the secrets behind how I created my images.  If you don't want to know how I made 'Golden Spirals' stop reading now! 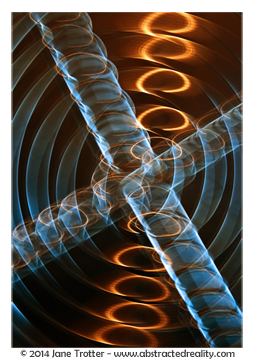 It would be wonderful to always get that ‘great shot’ within the first few pictures I take on a photo shoot.  Sometimes, either through good management, happy coincidence or pure serendipity, I do get what I’m looking for in those early stages.

But more often than not, it’s a process of experimentation and being prepared to try several different techniques, viewpoints and approaches along the way.

Rather than show you any ‘set up’ shots behind ‘Golden Spirals’ (essentially there aren’t any) I thought I’d take you behind the scenes and into the developmental process of how I approach an object, learn what works and what doesn’t, and then, once I have found a particular angle I like, how I follow that direction to achieve the best shot I possibly can. 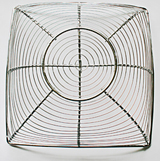 This upturned wire fruit bowl is the object I used to make ‘Golden Spirals’. It took me a while to get a feel for exactly what I was working with and what sort of image I wanted to create.  Having tried several shots of the bowl in a rather static presentation, I soon discovered I wanted to create more of a dynamic feel so decided to experiment with moving the camera. 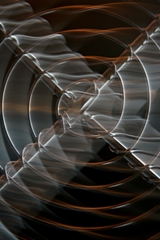 This is one of my early attempts.  Essentially I’m incorporating two design elements – the crossing lines and the curves.  I found the image interesting, to a degree, but not enough to hold my interest for long and I wanted more colour and energy.  But, I did like the interplay of the lines and curves and felt I could pursue this further. 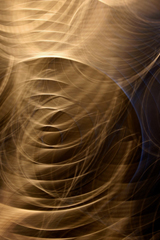 So I tried focusing more on the ‘curves’ aspect in this image.  The overlapping golden circles certainly contain more colour than the previous image, as well as some textural interest.  However, I had reservations about the compositional strength as there’s really nothing for the circles and curves to play off against. 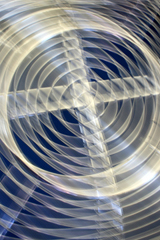 Not to be deterred, I tried again and revisited my first thought of incorporating both visual elements of crossing lines and surrounding curves within the one shot.  Now, the component elements are more defined and distinct and there’s more of a recurring ‘rhythm’ to the image with the repetition of line and shape.  I was beginning to hone in on what I really wanted to achieve. 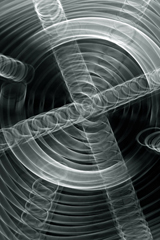 By this stage things were starting to come together.  While this image doesn’t contain the element of colour I was looking for, I did manage to hit upon an additional point of interest.  You’ll notice that the diagonal crossing lines are made up of small, repeating circles.  I achieved this by including an extra, quick, circular ‘flick’ of the camera within my overall panning movement. 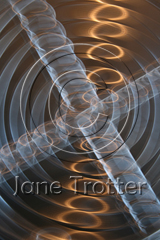 Several hours, and I’ve lost count of how many images later, I took ‘Golden Spirals’.
Bearing absolutely no resemblance to the fruit bowl any more, this is the original, ‘in camera’ image.  You can see it’s similar to the previous shot but has been reduced and simplified even more.  The golden circles are actually individualised points of light which were reflecting off the wire bowl.  It was getting late in the afternoon when I was taking these shots, and I decided to turn my desk lamp on to provide an extra light source.  Small, localised points of light then appeared on the individual wires of the bowl.  A quarter of a second exposure coupled with the circular camera action then transformed these tiny points of illumination into the golden swirls.

Well, it's no surprise what these are! This is probably my most easily discernible image (even … END_OF_DOCUMENT_TOKEN_TO_BE_REPLACED

I must confess, I'm a sucker when it comes to colourful patterns. I think I'm attracted to the … END_OF_DOCUMENT_TOKEN_TO_BE_REPLACED

There are two household chores I really dislike - cleaning the shower and doing the vacuuming. I … END_OF_DOCUMENT_TOKEN_TO_BE_REPLACED

I always like to challenge myself in my photography. Especially with triptychs, it can be extremely … END_OF_DOCUMENT_TOKEN_TO_BE_REPLACED

I always like to keep a selection of the images I take from a photo shoot. Firstly, I’ll choose the … END_OF_DOCUMENT_TOKEN_TO_BE_REPLACED

With today’s abundance of technology and amazing gadgets, it’s easy to forget about the humble piece … END_OF_DOCUMENT_TOKEN_TO_BE_REPLACED

I’m always on the lookout for colourful things which I think might be useful for my photography. But … END_OF_DOCUMENT_TOKEN_TO_BE_REPLACED

I love playing around with images. For me, one of the greatest challenges and pleasures is taking a … END_OF_DOCUMENT_TOKEN_TO_BE_REPLACED

It’s amazing what your subconscious can come up with. A shot can be years in the making if you go … END_OF_DOCUMENT_TOKEN_TO_BE_REPLACED

Sometimes you hold onto an image and you don’t know why. There’s a little voice in the back of your … END_OF_DOCUMENT_TOKEN_TO_BE_REPLACED