Spoiler Alert!  In my 'Exposed' series of articles I reveal some of the secrets behind how I created my images.  If you don't want to know how I made 'Over the Shoulder' stop reading now! 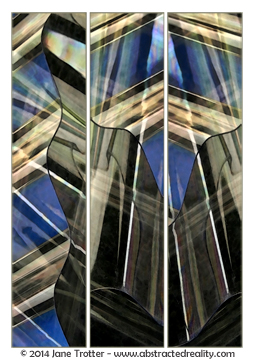 This ‘Exposed’ article reveals the subject matter for ‘Over the Shoulder’ and will take you on a behind the scenes look at how ideas for the image first began to grow. If you’d like to delve deeper and learn more about the creative process involved in transforming the original image into a triptych, visit ‘The Art of Creating a Triptych’.

Investigate our garage and you’ll find an eclectic array of odds and sods, long forgotten paraphernalia, neglected and rusting gardening tools (mea culpa) and an entire metropolis of intricately woven spiders’ webs… Oh dear! However, if you look hard enough, you can find hidden gems just waiting to be photographed. My rather messy garage was the birthplace of ‘Over the Shoulder’. 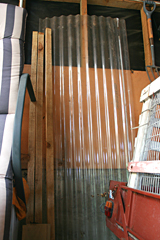 Mucking around in my garage

This large sheet of corrugated roofing plastic was leaning up against the garage wall. We’d previously had work done on our garage roof, replacing and updating the old sheets which had become rather brittle and weather-worn. This sheet was left over. I noticed how the light was reflecting off the ridges in the plastic and thought there was potential for exploring this with my camera. 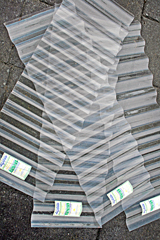 I rummaged around and was pleasantly surprised to find several smaller off-cuts which would be much easier to manoeuvre. I took them out of the garage and laid them down on the driveway rather haphazardly. My casual approach and disorganisation proved to be a blessing in disguise as I quickly discovered the overlapping corrugations produced very intriguing patterns. 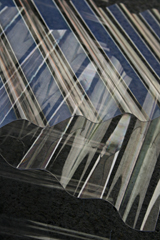 I then spent quite a bit of time playing – moving the sheeting around so the corrugations and accompanying reflections would create the most dynamic effect. I was fascinated by just how much ‘depth’ I was achieving in my shots and how complicated and intricate the patterning was becoming. I’d also managed to reflect a little of the blue sky in the top piece of plastic, adding yet another dimension. This shot is the original image which I used for ‘Corrugation’ and ‘Over the Shoulder’. 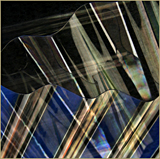 ‘Corrugation’ is my first presentation and interpretation of the plastic sheeting. Choosing a square crop, I selected what I considered to be the most visually compelling part of the image and focused on the opposing, yet complementary diagonal lines. I saturated the colours to give more energy, rotated the image 180 degrees and made a horizontal flip. I do recall when I was making this photo, viewing it in many different orientations and becoming hopelessly confused and puzzled as to what looked the best. After a lot of deliberation, I chose this presentation and followed my gut instinct. 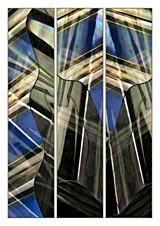 I’m not entirely sure why I reworked ‘Corrugation’. With my new-found love for triptychs, I was revisiting several of my older images to see if they would work in the triptych format. I suspect ‘Corrugation’ fell into this category. At first, I was very dubious and tried various cuts and crops, achieving mixed success. However, when I experimented with a vertical cut, things really began to get exciting – particularly when I could see the formation of a person – a head, curving shoulder and arching back. It was so exhilarating to discover a whole new way of looking at a photograph and to be able to present it in a completely different light.

Follow the evolution of ‘Corrugation’ into ‘Over the Shoulder’ in my article – The Art of Creating a Triptych.

Well, it's no surprise what these are! This is probably my most easily discernible image (even … END_OF_DOCUMENT_TOKEN_TO_BE_REPLACED

I must confess, I'm a sucker when it comes to colourful patterns. I think I'm attracted to the … END_OF_DOCUMENT_TOKEN_TO_BE_REPLACED

There are two household chores I really dislike - cleaning the shower and doing the vacuuming. I … END_OF_DOCUMENT_TOKEN_TO_BE_REPLACED

I always like to challenge myself in my photography. Especially with triptychs, it can be extremely … END_OF_DOCUMENT_TOKEN_TO_BE_REPLACED

I always like to keep a selection of the images I take from a photo shoot. Firstly, I’ll choose the … END_OF_DOCUMENT_TOKEN_TO_BE_REPLACED

With today’s abundance of technology and amazing gadgets, it’s easy to forget about the humble piece … END_OF_DOCUMENT_TOKEN_TO_BE_REPLACED

I’m always on the lookout for colourful things which I think might be useful for my photography. But … END_OF_DOCUMENT_TOKEN_TO_BE_REPLACED

I love playing around with images. For me, one of the greatest challenges and pleasures is taking a … END_OF_DOCUMENT_TOKEN_TO_BE_REPLACED

It’s amazing what your subconscious can come up with. A shot can be years in the making if you go … END_OF_DOCUMENT_TOKEN_TO_BE_REPLACED

Sometimes you hold onto an image and you don’t know why. There’s a little voice in the back of your … END_OF_DOCUMENT_TOKEN_TO_BE_REPLACED