I’m frequently asked “how do you create your triptychs?” “Where do you decide to crop and how do you assemble it all together?”

Even for an experienced eye, it can sometimes feel pretty daunting and overwhelming. But with a little practice and patience, you’ll quickly begin to conceptualise and visualise your final image.

So, as a bit of background into how I go about making a multi-panel work, I thought I’d give you some insight into how I created ‘Ascension Blue’. This is actually a nine-panel piece, but my approach, experimentation and work flow follow the same path as my triptychs.

It really depends on what you’re looking for. For this multi-panel work, I knew I had to have contrasting colours in the panels so I could play them off against each other. 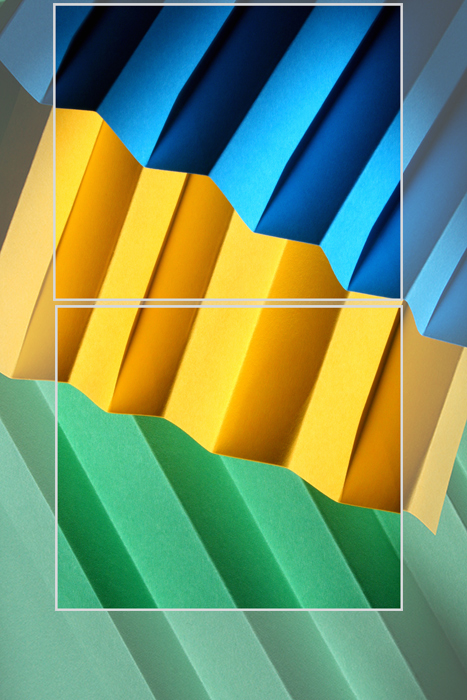 Here is the original base image with my cropped sections overlaid. This particular cropping is pretty straightforward, but I’m not averse to making my selection on an angle if I think it’s needed.

I’ve written a blog post on ‘Creative Cropping for your Triptychs’, so if you want to delve deeper into how to crop your images, you’ll find plenty of ideas and examples there.

First – create a blank file with plenty of space for you to put your panels on. Make sure you’ll be able to shift them around easily and, that you can add more panels than necessary. This is especially useful if you want to try out what various combinations will look like. 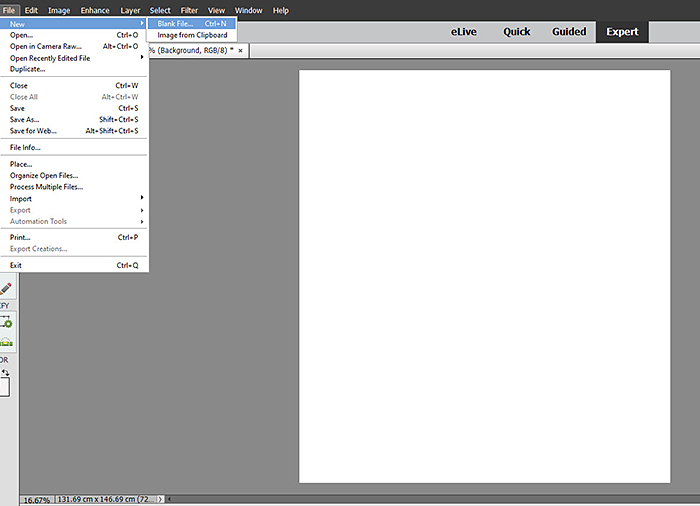 Next, add your panels by dragging them up from the photo bin. You can do this multiple times if you wish. See all of the extra space I’ve allowed in anticipation of adding extra material. 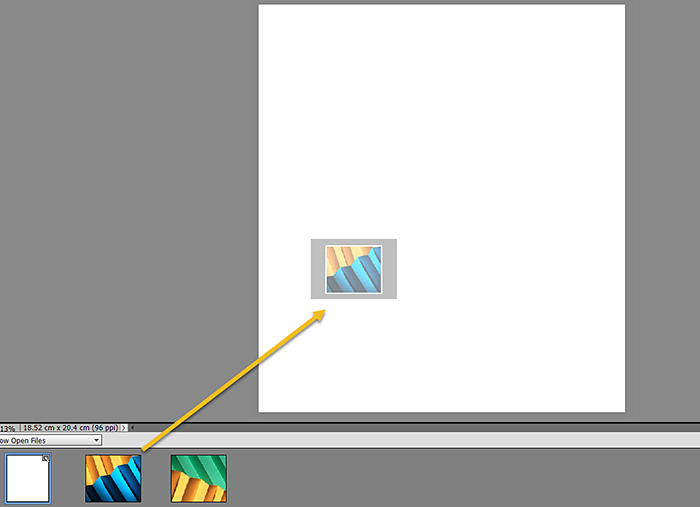 As my panels aren’t square, I had to decide what their orientation should be. 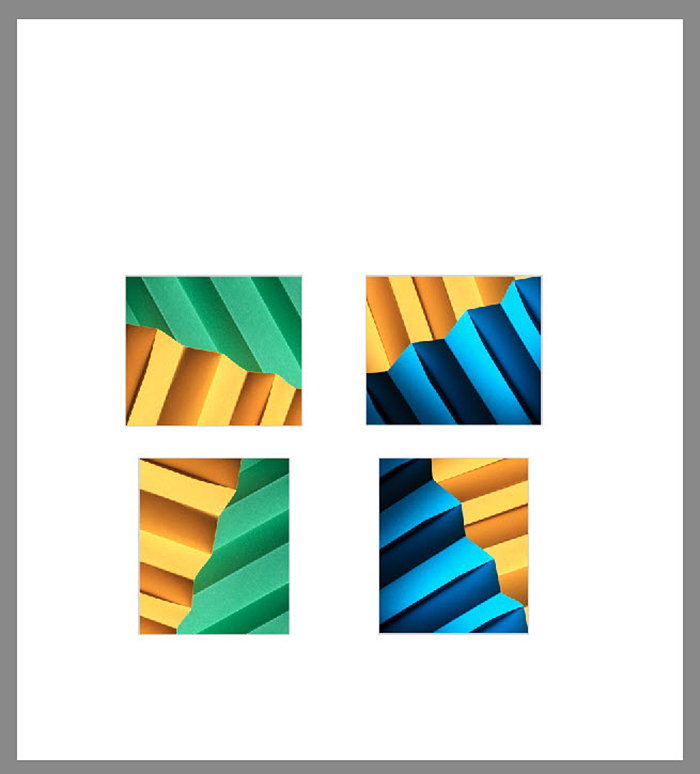 I felt there was more potential with a vertical presentation as the folded paper began to look more like steps.

Rotate and Flip are Your Friend! 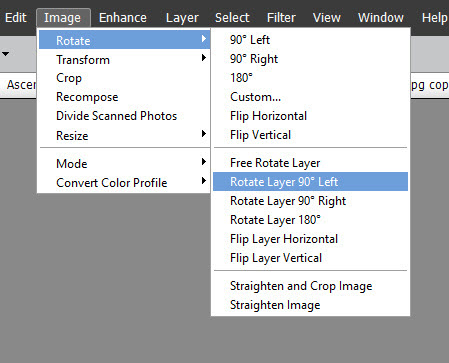 I should mention at this point that I use the rotate and flip functions – a lot! Abstracts are great as they lend themselves very readily to this kind of experimentation.

Remember, if you only want to rotate or flip a single panel and not the whole image, select ‘rotate layer’. There have been numerous times when I’ve inadvertently flipped my entire image and thought “hhhhmmm – that’s not what I wanted to do…” Thank goodness for the ‘undo’ button.

As an example, here’s the blue and gold panel in its various orientations. 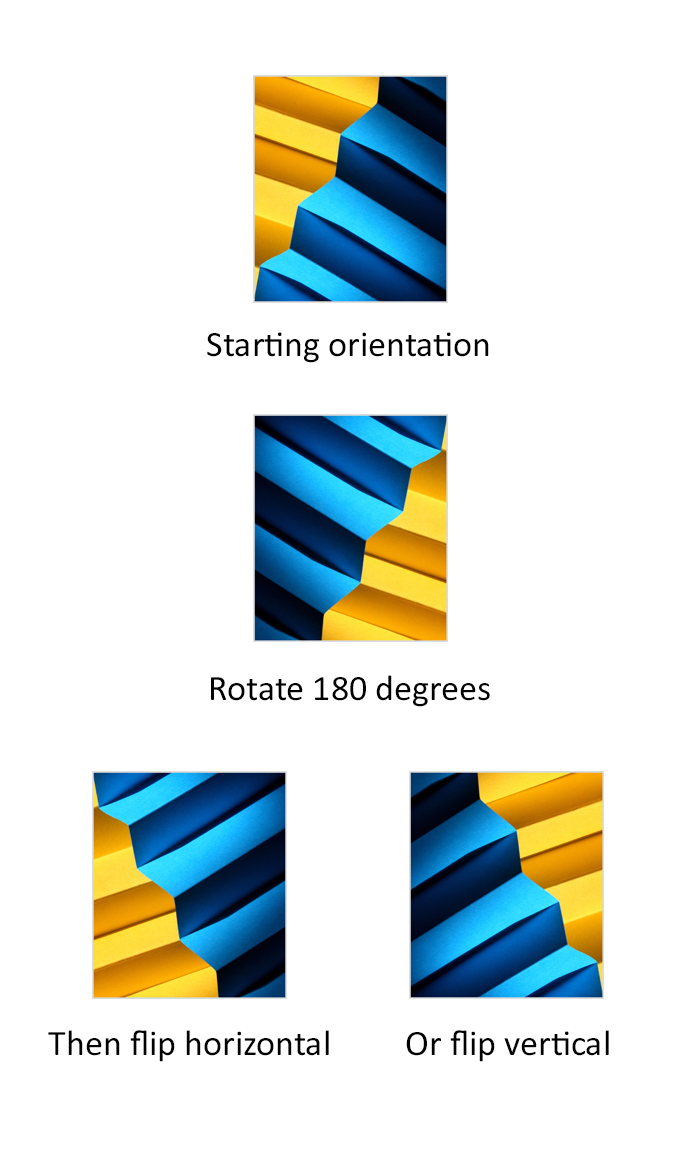 Of course, all this flexibility can be a double-edged sword. You’ve now got many more options to make connections, shapes and patterns across your panels. On the other hand, the number of different permutations to calculate and attempt can become unnervingly large. Still, I’m a “glass half full” kinda girl, so really relish the chance to try out all the different possibilities.

So now I had nine panels to work with. I began to play around by shuffling the panels into different locations, flipping and rotating. At this stage, it was a real hodge-podge without any structure, but I needed to get a ‘feel’ for what the image could look like. 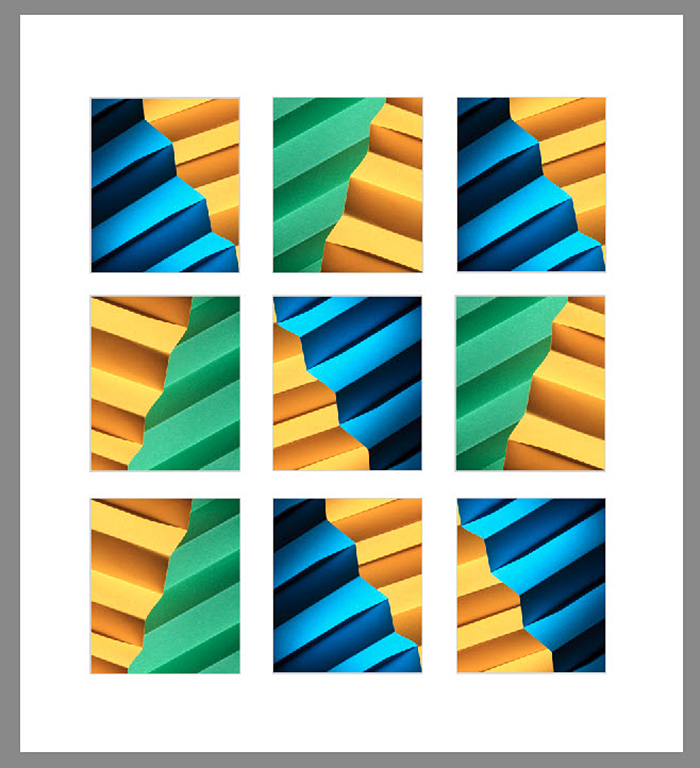 After a while, I began to ‘see’ the potential for a blue ‘staircase’ down the middle panels. This would be the main anchor-point of the image – my ‘Ascension Blue’. 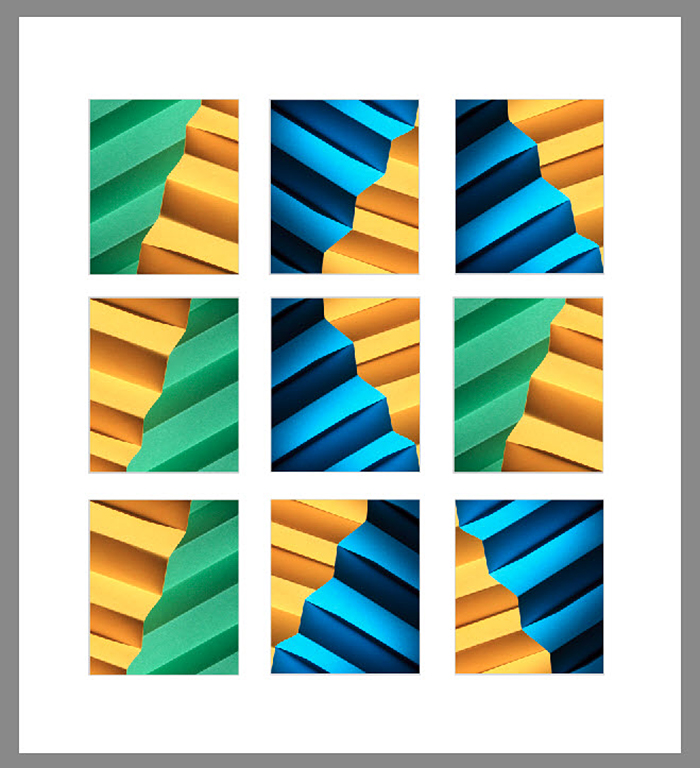 Next, I had to sort out what to do with the gold and green panels. By chance, there happened to be four of them, so positioning them in the four corners seemed like a good idea and would add an element of symmetry to the overall design. 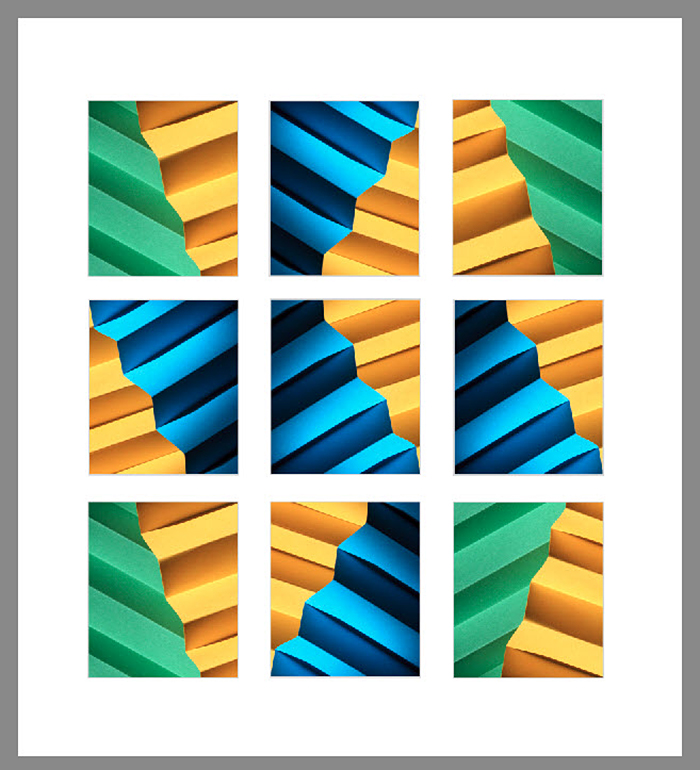 The finishing touches were added by flipping and rotating the two remaining blue and gold panels. 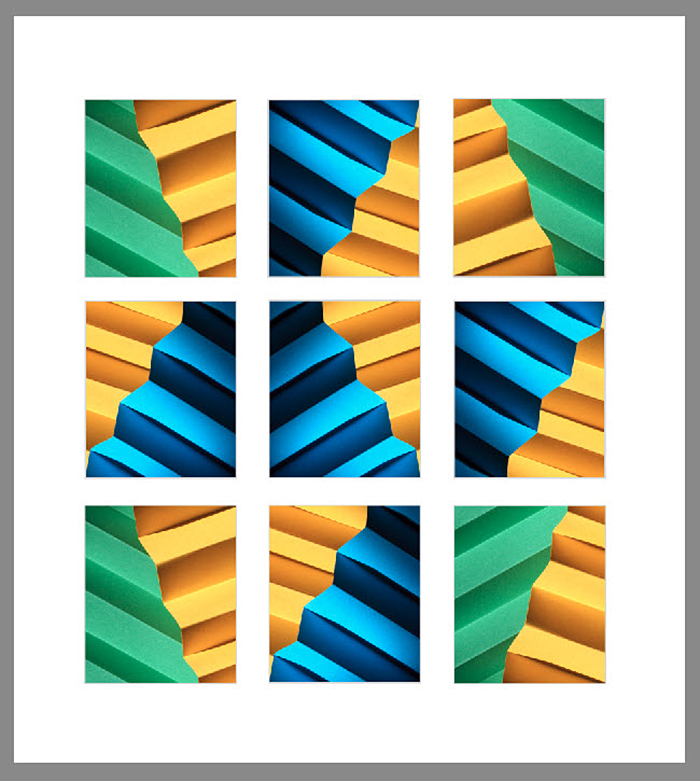 How Do You Know When It’s Finished?

Of course, there was a great deal of trial and error as I negotiated my way through the bewildering array of configurations. When constructing an image like this, sometimes it’s very difficult to know when to stop and say, “yes – this is it – it’s finished”, especially as there’s always the temptation to tinker just that little bit more.

More often than not, I’ll end up going with my gut – if I feel visually satisfied and content, even though intellectually I know I could attempt other things, then I will leave it. Don’t underestimate your instincts and learn to trust them.

I'm frequently asked "how do you create your triptychs?" "Where do you decide to crop and how do you … END_OF_DOCUMENT_TOKEN_TO_BE_REPLACED

Deciding how to crop a single image to create a triptych can be challenging. Should you go for a … END_OF_DOCUMENT_TOKEN_TO_BE_REPLACED

What are the different ways artists and photographers use the triptych format? What can a three part … END_OF_DOCUMENT_TOKEN_TO_BE_REPLACED

I love to create triptychs. Over the last few years I’ve been investigating and experimenting with … END_OF_DOCUMENT_TOKEN_TO_BE_REPLACED

Ever tried creating a triptych? Have no idea what to do and what things to look for when you’re … END_OF_DOCUMENT_TOKEN_TO_BE_REPLACED

I love creating Triptychs.  They’re great fun, a great challenge and a great pleasure to … END_OF_DOCUMENT_TOKEN_TO_BE_REPLACED