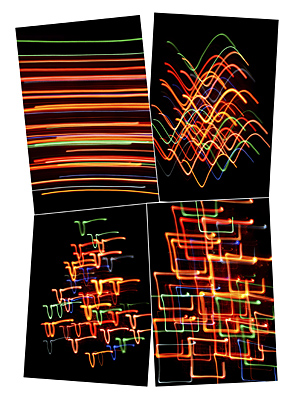 Are you feeling like your photography needs an extra motivational kick? Do you want to try something a bit different and challenge your creativity? How about setting yourself a photographic ‘study’ or ‘mini-project’ on one single subject, to be undertaken in one single sitting?

I was motivated to do a mini-study one recent Christmas holidays when I was admiring the decorative lights on our Christmas tree. These multi-coloured lights made a cheerful and festive glow in our darkened living room and my mind soon turned to pondering the different ways I could photograph them. Not to be dissuaded by the late hour – it was nearly 10pm – I eagerly grabbed my camera and started to formulate a plan. My goal was to explore several different photographic techniques and see what varied effects I could produce.

I tried a few ‘static’ shots first, but felt this approach would be fairly limited, so instead, I began to focus on images which would contain movement in one form or another. 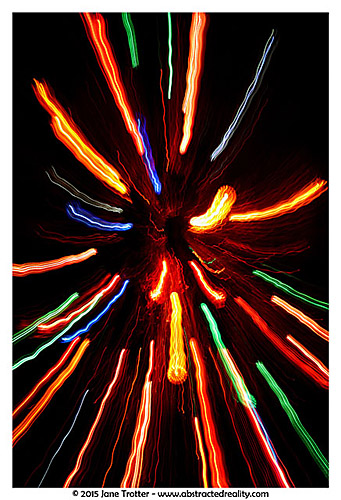 I started out with a simple, continuous zoom burst with a one second exposure. ‘Speed Warp’ was one of the very early shots in the series and this particular technique was the first one which sprang to mind. 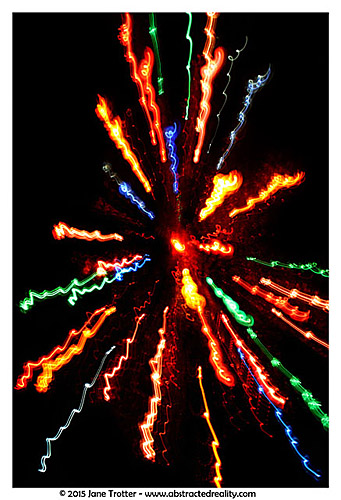 I followed the continuous zoom burst with a more staggered, jerky zoom effect where I would zoom, pause, zoom, and pause within a two second exposure. 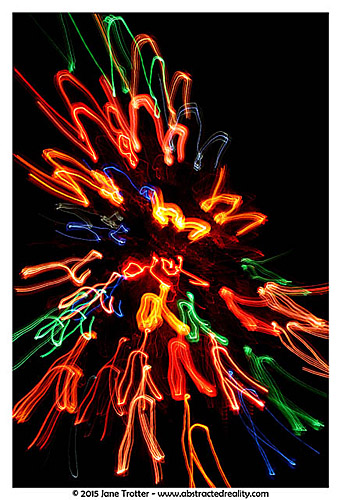 Here’s another take on the zoom burst – this time I’ve zoomed in and out, and in and out within the single exposure.

I decided to move in closer for these next few shots and experiment with moving the camera to create different shapes. 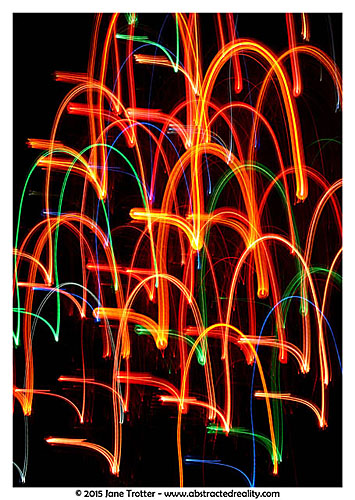 This is a more curvaceous interpretation, reminding me of a cascading waterfall. 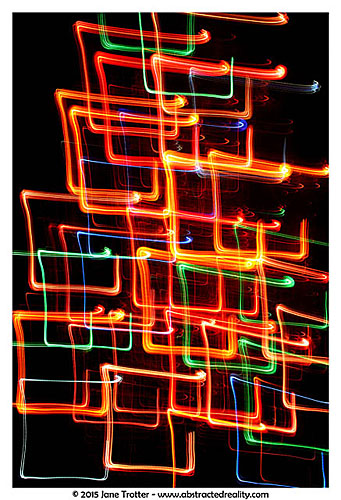 Experimenting with more geometric shapes, ‘Boxed In’ plays with squares. 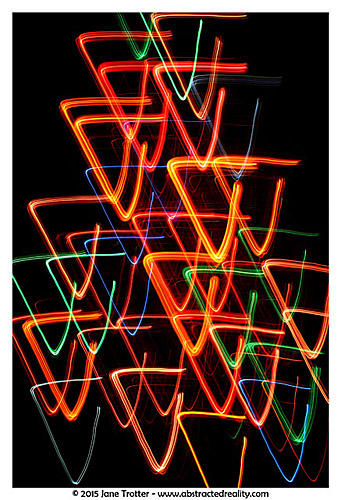 And as the title suggests, ‘Triangular’ explores these recurring patterns. 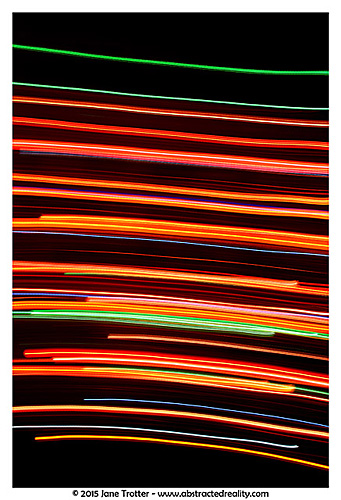 Gone in a Flash

‘Gone in a Flash’ is a straight pass without any additional camera movement. While I enjoy the grand, sweeping gesture, I decided to get a little more adventurous and moved the camera within the pan. I managed to achieve some quite different effects…smooth and flowing. 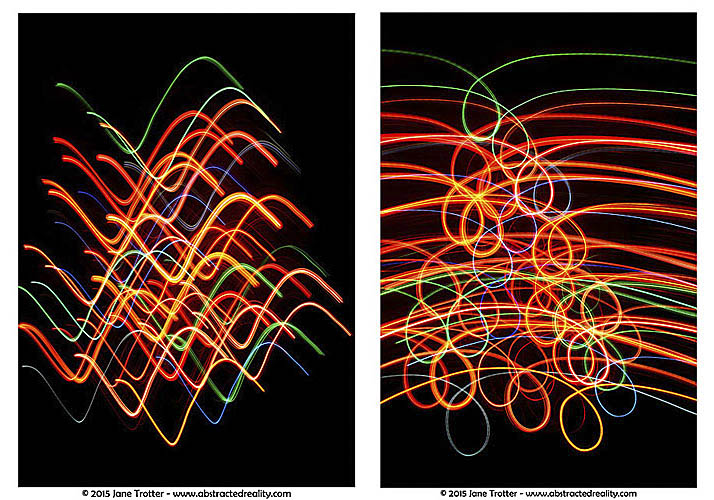 Sine Wave and Loop the Loop

Then more angular and distinct – ‘Arrhythmia’ reminds me of a heart rate monitor while ‘V Formation’ is even more quirky. 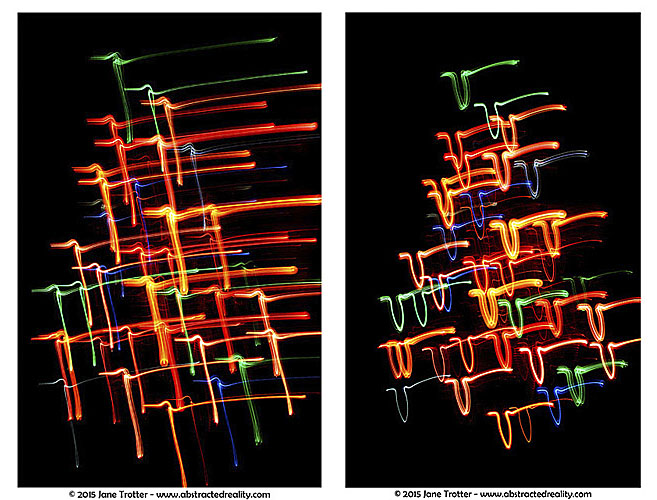 I finally decided to change the orientation of my panning action and made a vertical pan instead. 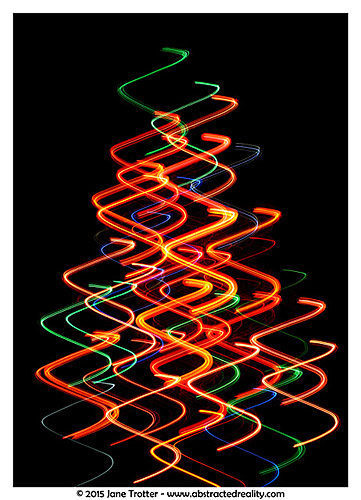 I enjoy this shot as I think it retains the shape of the Christmas tree quite well. In fact, ‘Fairy Lights’ was taken near the end of my photo shoot and is really the culmination of all of the previous experimentation and refinement.

I can highly recommend the challenge of a mini-study. They’re great fun and will definitely get you thinking more diversely and creatively. I still have fond memories of that night when my Christmas lights began to dance in ways I’d never imagined!

As the saying goes, “one thing leads to another”. I find this very true when it comes to my … END_OF_DOCUMENT_TOKEN_TO_BE_REPLACED

Creativity is a wonderful thing. Never static, your mind can be subconsciously mulling over ideas … END_OF_DOCUMENT_TOKEN_TO_BE_REPLACED

Do you have a photograph that, looking back years later, you can say – “That’s the one which kick … END_OF_DOCUMENT_TOKEN_TO_BE_REPLACED

What makes a good abstract photograph? What qualities does the image need and what are some of the … END_OF_DOCUMENT_TOKEN_TO_BE_REPLACED

Are you feeling like your photography needs an extra motivational kick? Do you want to try something … END_OF_DOCUMENT_TOKEN_TO_BE_REPLACED

What are the advantages of taking abstract photos? What benefits will you gain from delving deeper … END_OF_DOCUMENT_TOKEN_TO_BE_REPLACED

Abstract images are conceived or imagined outside of ‘reality’. They can encompass a huge variety of … END_OF_DOCUMENT_TOKEN_TO_BE_REPLACED

How did my journey into the realms of Abstracted Reality begin? I’d like to start by giving you a … END_OF_DOCUMENT_TOKEN_TO_BE_REPLACED