Pictures at an Exhibition – the Symbiosis of Art & Music

Perhaps one of the finest examples of the link between art and music is Mussorgsky’s ‘Pictures at an Exhibition’, composed in 1874.

Russian composer Modest Mussorgsky (1839 – 1881) wrote this famous suite of ten piano pieces (plus a recurring and varied Promenade) in response to the death of his friend Viktor Hartmann (1834 – 1873). An artist, designer and architect, Hartmann died suddenly and unexpectedly of a cerebral aneurysm at just 39 years of age. Shocked, dismayed and deeply moved by his friend’s untimely demise, Mussorgsky set about composing a piece in his honour, in fact, the complete title of the work is ‘Pictures at an Exhibition – A Remembrance of Viktor Hartmann’.

A memorial exhibition of over 400 of Hartmann’s artworks was organised and shown in the Imperial Academy of Arts in Saint Petersburg in February and March 1874. Mussorgsky attended and contributed to the exhibition, providing two pictures which Hartmann had previously given him. Later that year in June, Mussorgsky completed his score in a matter of weeks. Writing to his friend and colleague Vladimir Stasov (to whom the composition is dedicated), he states:

“My dear généralissime, Hartmann is boiling as Boris [Mussorgsky’s Opera Boris Godunov] boiled—sounds and ideas hung in the air, I am gulping and overeating, and can barely manage to scribble them on paper. I am writing the 4th No.—the transitions are good (on the ‘promenade’). I want to work more quickly and steadily. My physiognomy can be seen in the interludes. So far I think it’s well turned…”

‘Pictures at an Exhibition’ encapsulates the idea of the viewer walking through a gallery. A ‘Promenade’ reflects the movement from artwork to artwork, and Mussorgsky structures the suite’s ten movements in a way which represents the viewer’s progress through the exhibition of Hartmann’s work.

Just as the paintings are varied and contrasting, so too is Mussorgsky’s music in which he reflects upon and depicts the scenes in each artwork.

‘Pictures at an Exhibition’ is a truly inspirational piece and stands as one of the virtuosic heavyweights in the piano repertoire.

While originally written for piano, it has also been arranged and transcribed for orchestra, notably by Maurice Ravel, whose 1922 version has been the most widely performed and recorded.

The original piano version is the closest to my heart, however, and it has been an utter pleasure to revisit the music and discover more about Hartmann and his drawings and paintings.

To give you a taste of the music, I’ve found a truly stunning performance by Evgeny Kissin – sit back and watch his fingers fly! The titles of the different movements of the suite are displayed as they occur so you won’t get lost.

And for those of you who’d prefer to listen to an orchestral version (Ravel’s), I’d recommend the Royal Philharmonic Orchestra conducted by Jean-Claude Casadeus.

‘Pictures at an Exhibition’ is just over half an hour long, and I would highly recommend you take time out and listen to it in its entirety. But if you wish to dip into just a few of the movements of the suite, I’ve included the start times for each movement in the information about them below.

Introducing ‘Pictures at an Exhibition’

Mussorgsky’s introduction to the suite sets the scene of entering a gallery and walking between the various pictures. Subsequent variations of the Promenade can be heard interspersed between movements of the suite.

The original picture to which this piece refers may well be lost, but this example provides the kind of inspiration Mussorgsky drew upon.

The picture on the left is one of Hartmann’s costume designs for Chernomor, the evil wizard in Glinka’s opera ‘Russian and Ludmilla’. The opera was performed in 1871 incorporating Hartmann’s design.

Hartmann’s drawing in the exhibition was apparently a design for a wooden nutcracker, in the shape of a gnome with large teeth, running awkwardly on crooked legs. Vladimir Stasov, one of the organisers of the exhibition of Hartmann’s work, described the painting as “a medieval castle before which a troubadour sings a song”.

The Tuileries Gardens were near the Louvre in Paris and Stasov recounted that the painting was of “an avenue in the garden of the Tuileries, with a swarm of children and nurses”.

While Hartmann’s original may no longer exist, these two painting by Edouard Manet will give you an idea of the scene. The one on the left is “Children in the Tuileries” painted between 1861-1862, and the one below is “Music in the Tuileries’, completed in 1863. 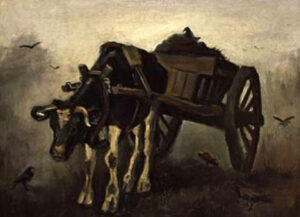 ‘Bydlo’ is the Polish word for ‘cattle’. Hartmann’s watercolour depicted a peasant wagon with huge wooden wheels being drawn by oxen.

Ballet of the Unhatched Chickens 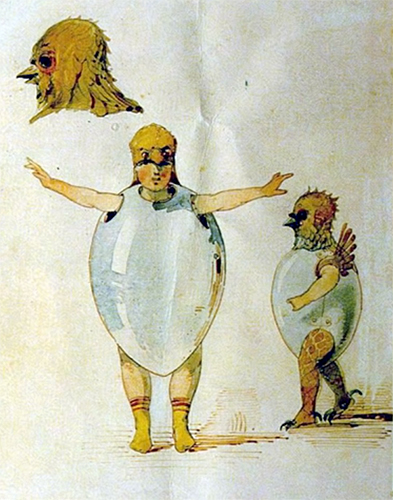 Hartmann drew 17 sketches for the ballet ‘Trilby’, which was based on the French author Charles Nodier’s short story ‘Trilby, or the Elf of the Argyle’.

The ballet featured children from the Russian Imperial Ballet School dressed as butterflies, birds and, as in this picture, unhatched chickens.

Samuel Goldenberg and Schmuyle – two Polish Jews, one rich and the other poor. These were based on two painting which Hartmann had given Mussorgsky and which Mussorgsky then lent to the exhibition of Hartmann’s work. 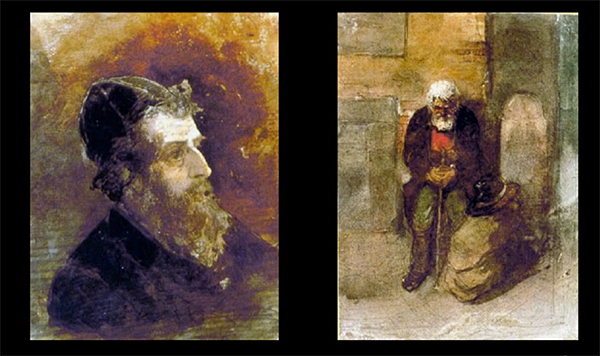 While it is thought the artwork for this piece no longer exists, the drawing depicted a group of women arguing noisily by their pushcarts at the market.

Hartmann graduated from the Academy of Fine Arts with Distinction and continued with another four years of study abroad, three of which were spent in France. This painting is a type of self-portrait, showing Hartmann, fellow architect Kenel and a guide holding the lamp, underneath the streets of Paris in the Roman catacombs. 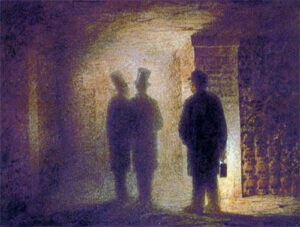 The Hut on Hen’s Legs

The hut depicted in Hartmann’s painting belongs to the witch Baba Yaga and is a design for an intricate bronze clock. In Russian fairy tales, Baba Yaga flies around on a mortar and lives deep in the forest in her chicken-legged hut; she would often appear as a terrifying old woman.

Vladimir Stasov recalled a scene at a costume ball where Hartmann shocked the attendees by coming in the guise of the witch, “…along rows of plaster of Paris Greek gods and goddesses, a witch, Baba Yaga, was running, her red braids streaming out behind her. A big fuzzy hat was pulled down over her eyes, her feet were wrapped in cloth, bony arms stuck out of the sleeves of her robe, a sparse beard protruded from her chin, her horrible eyes gleamed maliciously on her painted face, tusks stuck out of her half-opened mouth.”

The Great Gate of Kiev 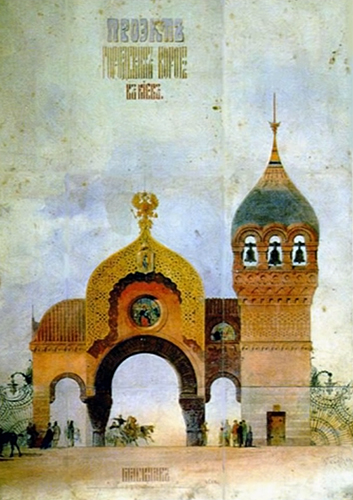 In April 1866, an attempt was made to assassinate Tsar Alexander II in the city of Kiev. Later, a competition was held to design a great gate in commemoration of his survival. Hartmann’s design was much talked about, and he himself considered it to be his best work. Unfortunately, the project was cancelled, the Tsar perhaps wanting to avoid a permanent and very public reminder of the plot against him.

Jane Trotter is an abstract photographer living in Dunedin, New Zealand. Reimagining everyday objects found around the home, Jane transforms them into colourful and dramatic pieces of contemporary art.